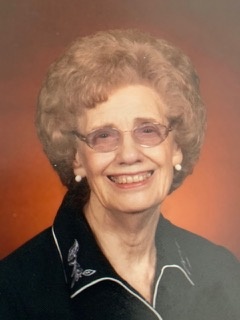 Caroline Morehouse died peacefully at home with her family on May 21, 2021.

She was born December 21, 1928 to Adam Sr. and Jean (McLellan) Lochner in Casper, Wyoming. She was raised with two younger brothers and a younger sister on the Lochner ranch west of Casper. She attended McKinley and Lochner schools, graduating from Natrona County High School in 1947.

Caroline married Ted J. Cardwell in 1947 and they made their home in Casper with their two children Barbara Jean and Ted James. Her husband Ted was disabled for much of their marriage and he died after almost 42 years of marriage. So, in addition to caring for him and their family, she worked as an office clerk and bookkeeper for several Casper businesses before retiring in August 2001.

Caroline was a member of Calvary Baptist Church for over six decades, serving as Sunday school teacher, deaconess, church clerk, and other roles over the years. She was also the bookkeeper for the church’s Christian school for several years; the school’s yearbook was dedicated in her honor in 1982. She loved the Lord and her church family.

Caroline also volunteered as a Pink Lady at Wyoming Medical Center for several years by working in the gift shop.

In September 2001 Caroline married Darrell E. Morehouse, moving to San Antonio, Texas for a few months until he retired from the Xerox Corporation. Then they returned to Casper to make their home, enjoying their retirement years here and traveling as much as possible.

Caroline loved being a homemaker and caring for her family. She was known for her hospitality to family and friends.

Caroline is survived by her husband Darrell, her son Jim Cardwell, and grandson Fenton G. Parke, all of Casper, and by several nieces and nephews.  She was preceded in death by her parents Adam and Jean Lochner, her first husband Ted, her daughter Jean Parke, her brothers Adam Lochner Jr. and Wolf Lochner, and her sister Kathy Meloy.

Visitation is scheduled for Thursday,, May 27 from 4-6 p.m. at Bustard’s Mortuary. The funeral service is to be held at Calvary Baptist Church, 1800 South Conwell, on Friday, May 28 at 1:00 p.m. Internment will be the following week on Tuesday, June 1 at 1 p.m. at  Memorial Gardens.

To order memorial trees or send flowers to the family in memory of Caroline Lochner Cardwell Morehouse, please visit our flower store.