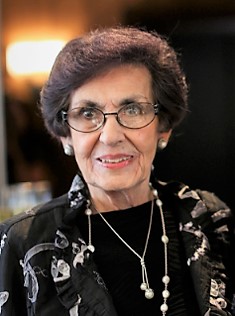 Helen Shereos Panos, 98, died peacefully surrounded by her children, Joan, Dean, and Ted Panos, on February 2, 2022. She was born in Sioux City, IA to the late Beulah and William Shereos. She had three sisters and two brothers, Beulah, Martha, Gus, Olga, and Nick. She married George Panos, a longtime Casper businessman, in 1946. Helen was a former ping-pong champion, avid tennis fan, enthusiastic poker player, long-serving member of the Philoptochos (friend of the poor), and devoted church goer. In addition to her children, Helen is survived by her daughter-in-law, Karyn Thompson Panos, and her grandchildren, George Assaly and George, Thomas, and Theodore Panos in addition to numerous nieces and nephews. A visitation will be held on Thursday, February 10th, from 7:00 - 9:00 pm at Bustards & Jacoby Funeral Home. Funeral services will be held on Friday, February 11th at 10:00 am at the Holy Trinity Greek Orthodox Church at 1350 E. C Street, Casper with internment to follow at Highland Cemetery. The church will host a Meal of Mercy for family and friends after the internment. In lieu of flowers, the family suggests memorial contributions be made to the Holy Trinity Greek Orthodox Church. Arrangements are under the care of Bustard and Jacoby Funeral Home , 600 CY Ave, Casper, WY 82601.

To order memorial trees or send flowers to the family in memory of Helen Panos, please visit our flower store.