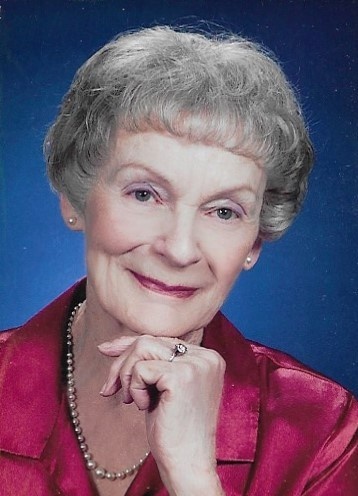 Barbara Shaw Dennis, a talented singer, vivacious friend, and loving wife and mother of five, passed away on Jan. 29, 2022, at age 94.

Born Barbara Leigh Shaw in Casper, Wyoming, on Jan. 1, 1928, she showed an early talent for singing. After graduating from Natrona County High School in 1946, she ventured to Chicago and earned a Bachelor of Arts in Music from Northwestern University in 1950.

Barbara met her “Southern gentleman,” Clyde Britton Dennis, when the young engineer boarded with her family while stationed in Casper for work. They were married on June 21, 1950, in Clyde’s hometown of Fayette, Mississippi. It was a case of opposites attracting. While he was reserved and serious-minded, she was gregarious and dramatic. He provided stability and good sense, and she supplied humor, joy and endless escapades. They enjoyed a loving marriage of more than 50 years until his death in 2002.

Thanks to Clyde’s distinguished career with Schlumberger and Atlantic Richfield, the couple lived in numerous cities and towns across the South and West throughout their lifetime. At various times, they lived in Mississippi, Louisiana, Wyoming, Arizona, and Texas. Barbara quickly adapted to the nomadic lifestyle and made each move into a fun-filled adventure for her children.

Music was her great love. Barbara’s home was continually filled with melody and her family grew up with an appreciation for the glory of music in their lives. In addition to being a proud homemaker, she was a voice and piano teacher, choir director for various choral groups, and a member of the prestigious Dallas Civic Chorus.

Barbara was a devoted Christian who loved tales of people overcoming adversity with courage, faith, and grit. She was an enthusiastic collector of objects that brought her joy: music boxes, books, dolls, tea sets, and other curios. She also collected people—she made friends easily and brought them together with coffees and bridge parties. Barbara was a master storyteller and had a comedic story for every occasion. Without a doubt, she made life richer and more delightful for all those who knew and loved her.

In a final letter to her family, she wrote, “The greatest joy I had on Earth was the very special privilege of being a wife and mother, with the added blessing of such remarkable children and grandchildren.”

Memorial services will be announced at a later date. In lieu of flowers, memorial donations may be made to St. Jude’s Hospital. The family wishes to extend their gratitude to Barbara’s dear friend Martha Empfield and family friend Michelle Moore for their faithful companionship and support, and to the staff of Meadow Winds Assisted Living for their kind care.

To order memorial trees or send flowers to the family in memory of Barbara Dennis, please visit our flower store.