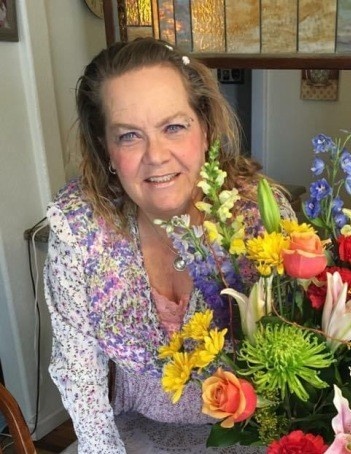 The Life and Times of Rebecca Jean Anderson

Rebecca “Becky” Jean Dewell was born the second child (first daughter) of four kids to Herb and Corrine May Dewell on December 7th, 1953 at Wyoming Medical Center in Casper Wyoming.

She was a vibrant and strong-willed child who showed quickly that there was nothing she couldn’t do.  As she grew up, she attended grade school, intermediate school, and high school in Casper.  She made many lifelong friends in those school years who she remained close to throughout her life.

In 1970, Becky met the man who would later become her husband and partner, Jack Roy Anderson.  This started a relationship of friendship and adventure for the duo.

In the fall of 1974, the pair welcomed the first of their 2 children, Miranda Rochelle Anderson (Mirf)

Becky and Jack decided to make things official on July 21, 1979, when they got married at The Little Chapel of the West in Las Vegas.  This put the official seal on their marriage, but that was only a formality for them as they were already committed to each other and their family.

1982 was the year that they welcomed their second daughter Afton Raye Anderson (Sparky) to the planet.

The family of four were a wild and adventurous bunch led by Jack and corralled by Becky.  Becky was a soul without boundaries and longed to do the things she was told she could not do.   In that same defiant spirit, she become a successful welder at Wotco in Casper.  She worked on everything from dump truck beds to dragline and shovel buckets, all the while pulling double harness with her husband and keeping the family satisfied and on point.

She left life at Wotco and started a long career in service at the Loaf N Jug store #103 in Paradise Valley where she continued to meet friends who would become as close as family.

In 2005 Jack went on to prepare a place in heaven and Becky stayed here to keep her daughters and grandchildren in line.

Becky's passion first and foremost was her children and grand children, followed by her brothers and sister and nieces and nephews a close second.  Her worldly passion was her gardens.  Through the many years she grew a plethora of flora and fauna that was nothing short of magnificent.

Her light and passion were well instilled in her daughters Miranda and Afton, and in her grandchildren Bryston (Miranda)-18 y/o, Xannah (Miranda)-11 y/o, Maddie (Afton)-10 y/o, Oaklend (Miranda)-9 y/o, Joplyn (Miranda)-7 y/o, Alice (Afton)-7 y/o and her two extremely handsome and funny not to mention charismatic son in laws.    The closeness of her daughters and grandchildren to her is evident daily and the passion for life and her adventurous soul is alive and well in all of them.

Becky made sure she left nothing undone in life and was blessed to unite on October 26, 2019, with a child she gave up for adoption in her younger years.  The fact that the child grew into a great person and was well loved by family gave her great peace and happiness and that in itself was a blessing and her heart swelled even more with pride in her family.

On December 11, 2020 at 1 am as the snow gently began to kiss the ground Becky took Jacks hand to spend eternity together.

Becky is preceded in death by her parents, her brother Jim and her beloved husband Jackie Roy.

Even death couldn’t extinguish Beckys untamed soul and passion for life as she chose to be a donor.  She blessed others with the gift of sight with eyes that saw lifetime of adventure in a different light.  In addition, she was able to donate tissue and bone to help those who need it most. Truly a gesture and testament of how she lived!

Her family and friends near and far, want her to know they love her to the moon and back!  Rest easy sweet Christmas angel.

A viewing for Becky's friends and family is set for Wednesday, December 16th from 4-5 pm at Bustards funeral home in Casper.  In addition, a celebration of life is being planned for late spring/early summer when we can all be together outside and the flowers are in bloom.

In lieu of flowers please send a donation to the Wyoming and Colorado Children’s Society in Cheyenne Wyoming at 314 East 21 St. Cheyenne WY, 82001 or go to their website and click to donate.

To order memorial trees or send flowers to the family in memory of Becky Anderson, please visit our flower store.