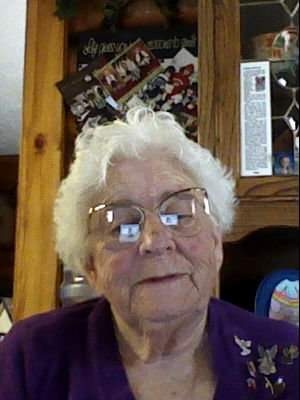 Bonnie Jean Sayler was born in Ft. Laramie, WY to parents Margaret and Joseph Stoneking. She grew up in Evansville where she met the love of her life. They married three weeks later and were together forty-three years before his passing in 1999.
She passed peacefully, in her sleep after a long battle with cancer which she fought courageously. She made friends everywhere she went, and while she was ornery, she always shared a smile.
Bonnie loved to bake and her cinnamon rolls were treasured throughout Wyoming and whatever state her grandchildren happened to be in. She cooked for travelers at the Husky and served school lunches at Evansville Elementary, East Middle School, and Kelly Walsh High School.
Children were a treasure to Bonnie as she had dozens of 'adopted' children, grandchildren, and great-grandchildren.
She loved to fish with ElDore and they traveled frequently together all while holding hands everywhere they went. After his passing she spent most of her time with her friends at Troopers Bingo Hall, having breakfast at Taco Time, or watching local sports teams in Casper.
She was preceded in death by the love of her life, ElDore Gilbert Sayler; her son, Joseph Gilbert Sayler; three brothers; and three sisters.
She leaves her daughters, Lydia and Vickie (Michael McMurtrey); as well as her son, ElDore (Kristine); and eleven grandchildren; and eighteen great-grandchildren; and three great-great-grandchildren.

To order memorial trees or send flowers to the family in memory of Bonnie Sayler, please visit our flower store.