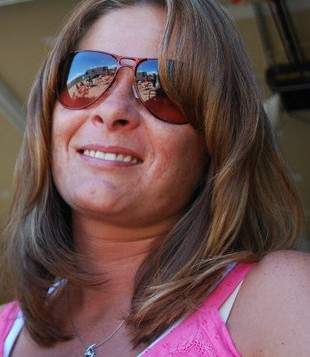 On Sunday April 11th, 2021, Corina Marie Moore “Cori” passed away suddenly at Wyoming Medical Center. Cori was born on June 27, 1973, to Jim and Callie Cole in Sioux City, Iowa. After a continuing change in work environment Jim packed up his family and moved them to different locations, ultimately making their final move with 6 of their 8 children to Evansville, WY in 1985. She went to Kelly Walsh High School, where she met her high school sweetheart and her soulmate, Frank. In 1990, they had a son, Richard and then in 1996, they had a daughter, Brooklyn. A month after Brooklyn was born, Cori and Frank married. Once they were married her life drastically changed. Cori was all about her kids and what they enjoyed. She sacrificed everything she could to ensure they had what they needed and got to do what they loved. She quickly became an avid sports mom in many different sports including football, volleyball, and wrestling. When it came to these sports it was ride or die, win, or lose, there was not in between because she loved watching just as much as they loved playing. After her kids were done with sports, she reluctantly adjusted to their adults’ lives, and quickly became involved with her grandkids. Although they were still very young, she was looking forward to and very supportive of their interests. During the chaotic seasons of sports, she started a new job at Circle C Resources in 1999, to help support not only hers but her children’s expensive lifestyles. She moved up the ladder quickly and furthered her employment in Human Resources. She was ruthless and knew exactly what she needed to do and when to do it with no questions asked. She decided in 2015, that she needed a change of pace and went to work for her father’s company as a secretary and bookkeeper. She enjoyed the change of pace because that meant more time with her kids and grandkids.

Cori was known for her caring, outgoing, loving, smartass personality. She was the type of person that would give the shirt off her back without hesitation or thinking twice about it. She loved going out with her siblings and family and having fun. She loved going camping and planting stuff in her garden. Her love for animals took up a big space in her heart. This love resulted in her bringing home a number of, at the time, an unwelcome number of animals which quickly became part of their ranch.

She is preceded in death by brother Daniel, Grandma Jerry, niece Christine, Father-in-Law Butch. She is survived by her parents, Jim and Callie, her mother-in-law Maxine, 5 brothers, Brad, Brian (Ruth), Aaron (Shannon), John (Kristie), Adam and one sister, Missy. She is also survived by her husband, Frank, and their two children Richard (Rachelle) and Brooklyn (Bob), and six grandchildren Reece, Parker, soon to be Cooper, McKinleigh, Natalie, and Daxton. She was survived by numerous aunts, uncles, nieces, nephews, and cousins.

Services will be held at Highland Park Community Church on Friday April 16th at 10am with immediate burial to follow at Highland Cemetery. A reception will follow at the Elks Lodge.

In lieu of flowers donations can be made to Frank Moore and then they will be disbursed out to Cori’s favorite charities.

To order memorial trees or send flowers to the family in memory of Corina "Cori" Moore, please visit our flower store.