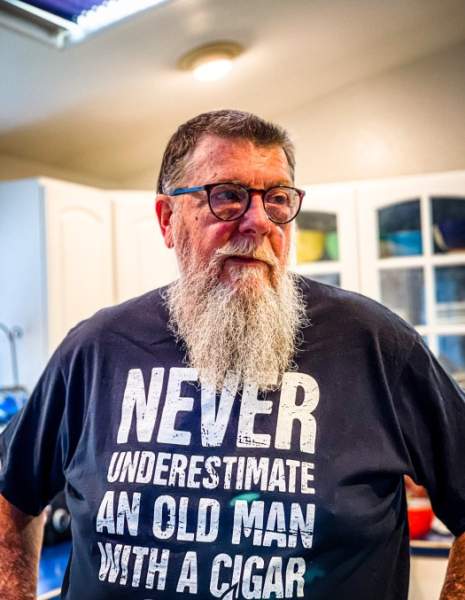 David (Dave) J Hinton, Casper WY, went to be with the Lord on July 12, 2021. David was born July 15, 1950 in South Bend, IN to Blake and Jeanette Hinton. His family moved to Naples, Florida in the mid-60’s. He would later move west, eventually making his home in North Platte, NE where he met and married Rebecca (Becky) Griffin. He said he was struck by lightning when he first saw her and knew she was the one. They were married July 5, 1980 and enjoyed many adventures over the next 41 years. From 1982 to 1993 Dave and Becky partnered with Blake and Jeanette as owners/operators of The Airport Inn restaurant in North Platte. After selling the restaurant, Dave, Becky and their children moved to Wyoming. In addition to his success in the restaurant industry, Dave was also a skilled bow hunter and taxidermist. After retirement he decided he needed a side job to help pay for the cigars he had come to enjoy and Lefty’s BBQ was born. Little did he know how popular his ribs, pulled pork and delicious sides would be. His business grew year after year until it became more than he could do on his own. After 4 very successful food truck seasons, Lefty’s was sold to Grant Street Grocery & Market in Casper WY where his legendary food continues to be sold. In addition to his wife, Dave is survived by his father, his children, Cody (Kim) Hinton of Grinnell, IA and Callie (Josh Bates) Miller of Casper, WY; five (soon to be six), grandchildren; sisters Dianne (Clark) Laier, Kathy (Cal) Miller, Becky Hinton and brother Randy (Jean) Hinton; as well as many nieces, nephews and loving friends. Dave loved Jesus, his wife, children and grandchildren, the Blues, Rock & Roll, golf, BBQ and a good cigar. A celebration of Dave’s life will be held at a later date. For now “he’s off like a terd of hurtles”.

Donations can be made in David’s name to Junior Golf Fund at Three Crowns Golf Club, Casper WY

Please join Dave’s family as we celebrate his life and the impact he had on everyone he met. We’ll be sharing stories, the music he loved and partaking of Lefty’s delicious BBQ.  Hawaiian shirts are encouraged but not required.

To order memorial trees or send flowers to the family in memory of David Hinton, please visit our flower store.