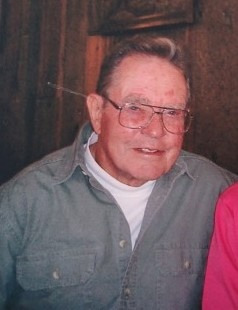 Donald Lee West, age 96, of Casper Wyoming, passed away peacefully at his home on April 20th 2022.

Don was born on October 27,1925, in Douglas, Wyoming. He attended the University of Nebraska where he majored in sculpture and minored in design.  After moving to Casper, Don became known for his commercial graphic art projects, In fact, there were probably few in the state that did not see one of his decal designs on an oil field truck or on a hardhat. Don’s heart frequently drew him back to the family farm.  He enjoyed gardening, whether on a large plot on the farm, or on a postage stamp in his backyard. He also enjoyed exploring the vast Wyoming wilderness, which inspired much of his art. He enjoyed carving Dryads which he felt was an extension of the Wyoming wilderness. Don was jovial and fun loving, always up for a good game of ping pong, or ready with a practical joke or some captivating true story that was always stranger than fiction. In his retirement, he enjoyed spending time with family and friends, and especially his dear wife, Harriet, on Alcova Lake.

Don is predeceased by his parents, Forrest and Fay West, and brother, William F. (and Esther) West Jr., as well as his wife of over 70 years, Harriet.  He is survived by his nephew, William F. West, III (Cheryl); niece, Terri West Saelee (Ko); sister-in-law, Barbara Elrod (Charles); brother-in-law, Gary Pickel (Janet); and many other loving family members and lifelong friends.

To order memorial trees or send flowers to the family in memory of Donald West, please visit our flower store.