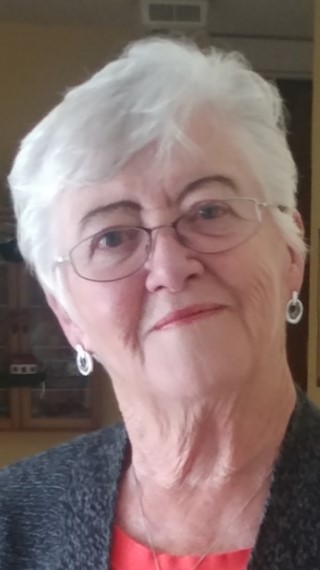 In the afternoon of July 15, 2021, the Lord Jesus Christ welcomed Donna V. Diesburg into his loving arms, ridding her of the dementia that changed her life 17 months ago.  She is now reunited with her husband, Richard (Dick), who preceded her in death just 16 days earlier on June 29, 2021. Services will be held for both Donna and Richard at St. Anthony’s Catholic Church.  A rosary will be prayed on July 21 at 7pm.  A joint Mass of Christian Burial will be held on July 22 at 10am followed by a graveside burial at Highland Cemetery and a reception in the church basement.

In her younger years she loved spelling and won several Spelling Bees.  She was a Brownie and Girl Scout, sang in the choir, twirled the baton, and modeled clothing for Sweet Briar store.

As she was raising her 8 children she also babysat countless others, practically raising the neighborhood.  At least one summer there were 16 little ones running around the house!  After retiring from that career, she worked at Faith Book Store which later became The Galilean.  In all her careers, she was a faithful witness to all she encountered.

Donna was very dedicated to both Our Lady of Fatima and St. Anthony’s Catholic Church her entire adult life.  She served as a lectern and Eucharistic minister and dedicated every Wednesday to visiting shut-ins, delivering communion and sharing her time with them up to the day of her diagnosis.  She became very close friends with one in particular, Evelyn Culver.

Over the years Donna donated countless hours teaching Catechism, serving as head of Altar Societies, and arranging books after most masses.  She also initiated guitar masses at both churches, playing and singing with her beautiful voice, and she provided music for many weddings and funerals.

She loved camping and fishing!  Her favorite spot was in the Bighorn Mountains on Prune Creek. Trained by the expert fly fisherman, Richard, she was ready for some “reel” action after just 5 or 7 practice casts into the backyard birdbath.  She was now hooked and inspired to follow Richard in tackling the Cutt-Slam Challenge sponsored by the Wyoming Game and Fish.  This challenge requires the catching and documenting of all 4 native species of Cutthroat trout in Wyoming rivers and streams.  Donna was recognized as the 100th person to attain this goal.

In lieu of flowers, donations can be made in memory of Donna to St. Jude’s Children’s Hospital, St. Anthony’s Tri-Parish School or St. Anthony’s Catholic Church. Bustard & Jacoby Funeral Home is assisting the family.

The family would like to express special thanks to friends who helped Richard and Donna on this journey as well as Carol, Sarah, Peyton from Frontier Home Health & Hospice, Wyoming Medical Center, and Beth & Tia and the rest of the staff at Central Wyoming Hospice. She will be dearly missed and forever treasured in our hearts.

To order memorial trees or send flowers to the family in memory of Donna Diesburg, please visit our flower store.