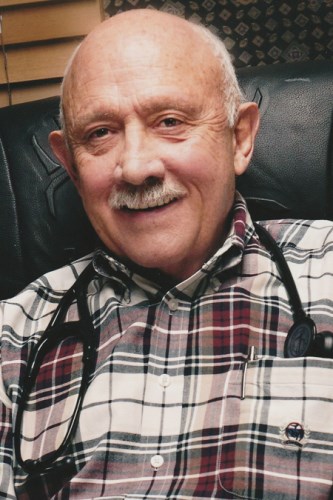 Dr. Harlen D. Myers, fondly known as "Doc", age 82, passed away January 13, 2021. He was born on August 15, 1938 in Los Angeles, California, a fact that he didn't share willingly or often. He spent his formative years in North Dakota, returning to California for High School and college. Harlen played football at University of Southern California while he earned his undergraduate degree in 1961. Harlen attended University of California, Irvine California College of Medicine, earning his MD in 1965. His residency was in Fresno California where he met his lifelong friend, Dr. Fritz Cubin.

After his residency, he served two years in the United States Army in New Mexico. After his Honorable Discharge in 1970, Harlen furthered his medical education in Colorado, completing a fellowship in pediatric hematology. In 1971, Halen moved to Casper and began his pediatric practice which was his life's work.

Harlen spent the majority of his medical career in Casper, caring for more children than you could possibly imagine. If you grew up in Casper in the 70's up through 2011, the chances are good that you had at least one visit to Dr. Myers office. He had many accolades and awards, but the countless lives impacted and saved through his practice were more valuable to Doc than any award.

In addition to his countless hours in the clinic, he also served on the board for the University of Colorado and was on staff for Colorado Children's Hospital up until his retirement in 2011. His career was long and ground-breaking as he was the seventh Pediatrician in the state, and the very first hematologist.

Harlen was more than just a Doctor. He was a father, a husband and a friend. When the stethoscope was put away, and the cowboy boots were on, Doc was all cowboy. His love of the land and horses was passed on to his son, Harley. He was a man with many sides, proud yet humble, generous yet demanding. He had high expectations for those he loved and an open heart for his patients.

Harlen took pride in his involvement in Wyoming politics in his younger days and was a strong supporter of our state representatives throughout his life.

After his retirement, Harlen enjoyed a quiet life with his wife, Kim, in Casper. He enjoyed visits from his many friends, colleagues and his grandchildren.

He was preceded in death by his son, Harley; wife, Paula; parents, Mearl & Norma Myers; and brothers, Les and Darrell Myers.

Public viewing and visitation for family and friends will be held from 4:00-7:00 p.m. Thursday, January 21, 2021 at Bustards and Jacoby Funeral Home.

A private memorial service will be held for family members.

Harlen's family would like to extend an invitation to Harlen's Celebration of Life to be held on July 1, 2021 at the Casper Country Club.

In lieu of flowers, memorials can be sent to Colorado Children's Hospital (childrenscoloradofoundation.org) in his memory.

To order memorial trees or send flowers to the family in memory of Dr. Harlen Myers, please visit our flower store.