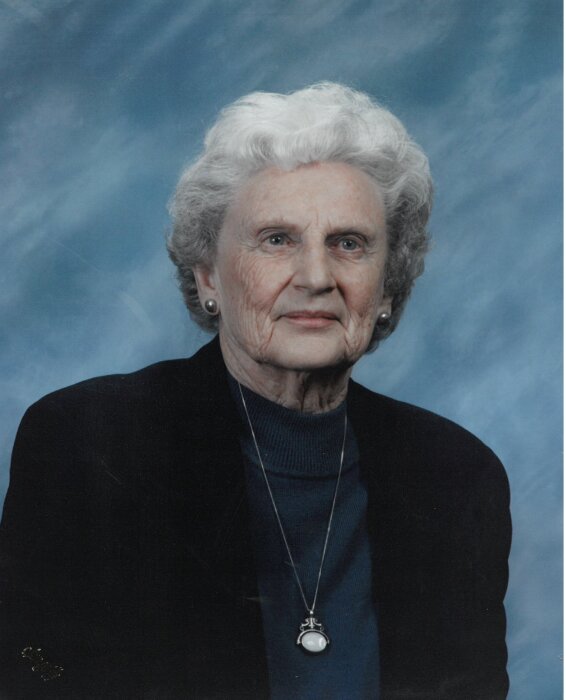 Elizabeth D. Clark, age 96, died peacefully on July 13, 2020. Surrounded by family, she left life as she lived it, quietly and with dignity.

She was born in The Plains, OH on December 11, 1923 to Paul and Mary (Ivanoc) Ulichney. She was the youngest of their four children. Growing up, she was an outstanding student which led to her attending Ohio University and being the first in her family to graduate from college. She then taught in Massillon and Canton, OH until she married Charlie Clark whom she met when the US Army sent him to school at Ohio U. After four years of writing letters while he was stationed in Burma and India during WWII, they married in Athens OH on July 11, 1947. They lived in his hometown of Salem, IL for a few months, and then set out for Colorado where Charlie became a student at the Colorado School of Mines. There they met lifelong friends and chose the life of a petroleum geologist which defined their years together. Daughter Susan was born in September of 1948 and when the $90 from the GI Bill didn’t stretch far enough, Liz went back to teaching in Golden. After Charlie’s graduation, they left Golden in their first car to start life in the oil business. In the next 33 years, they lived in Gillette, WY, Casper, WY (3 times), Sheridan WY, Grand Junction, Durango and Denver, CO. In each of these places, Liz created a warm, loving home. Her family loved stories of each of these places and she did say that, a time or two, she wondered what she had gotten herself into.

In every city she called home, Liz was active in the Catholic Church. She was a member of Our Lady of Fatima parish in Casper for over 50 years and was a long time member of St. Bernadette’s circle. She was also a 50 year member of GeoWives and was always involved in Susan’s school and activities. She loved reading, gardening, crossword puzzles, Scrabble, dishes and linens and always, she loved learning. She took classes from the Historical Society, at Casper College and was always ready to go somewhere to see what was there. She was not a fan of dirt roads to oil well locations but she did her fair share of that kind of trip as well. Always though, there was something to learn. With her knowledge of English and History and Charlie’s knowledge of geology and all the things a farm boy knows, they were wonderful travelling companions.

With Charlie’s death in 1984, Liz’ life changed but she spent holidays and vacations with her daughter and family where she was a beloved grandmother and later great grandmother. Her son-in-law told people she was none of the bad things associated with mothers-in-law and she was always welcome. She was a patient and gentle teacher with her grandchildren and great grandchildren and, in turn, they kept her tuned in to what was happening with the younger generation and what was new at school. She never lost her interest in children and in education.

When it became clear that Liz could no longer live alone, she moved to Denver near her family. She never stopped missing her home and her car but she loved the caregivers who helped her. “Miss Liz” always had a full candy jar and wanted to know about their families and their history. Ever the teacher, she went out of her way to encourage any of them who were in school and she loved seeing their graduation pictures. She never stopped developing new relationships with the people around her.

Liz was preceded in death by her husband Charlie, her siblings and their spouses Paul Ulichney (Clarabel), Mary Vessalo (Mike) and John Ulichney (Elaine) and her niece Rita Barlitt.

Services will be held on Thursday, July 23 at 10am at Most Precious Blood Catholic Church 3959 East Iliff Avenue in Denver.  She will go home to Wyoming and a memorial service will be held at Our Lady of Fatima parish on Friday, July 24 at 11:30.  Burial will be at Highland cemetery.

Memorial gifts may be made to:

To order memorial trees or send flowers to the family in memory of Elizabeth Clark, please visit our flower store.