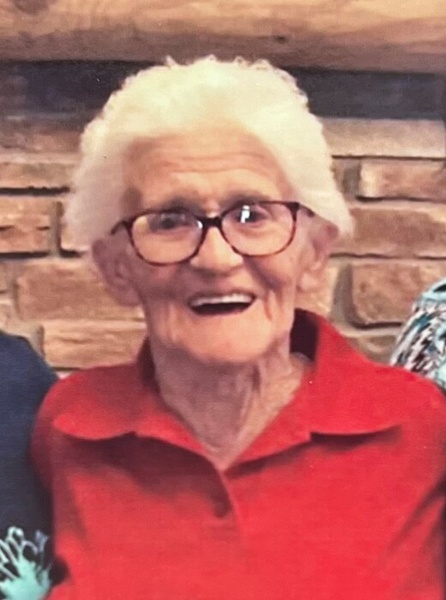 Ellen Shanley was born on April 3, 1929, in Hall County, Nebraska to Thomas and Norma Shanley. She attended grade school in Ainsworth, Nebraska and graduated from Shoshoni High School in 1947.

She married George Earl Spiva on June 12, 1947, in Shoshoni, WY where they lived until 1956 when they moved to Casper. Bea worked for the Mills Post Office for several years. Upon retiring from there, she and George started Spiva Backhoe Service which they ran together. Also, through the years, she was a foster mother to hundreds of children. Some she had for just a few hours, and others lived with them for a couple years.

Bea and George moved back to Shoshoni in 1999 where she helped run the Senior Center. Bea was a woman of faith and enjoyed reading her bible. She loved gardening, her flowers, feeding the birds and being in the mountains.

Several years after her husband’s death, she moved back to Casper in 2013 and lived at Mountain Plaza Assisted Living until her passing. She was very active in all their activities and enjoyed the friends she made there.

She is survived by her son, George E. Spiva and his wife Debbie of Casper, Sons-in-law Alan Bessler of Worland and Craig Skogen of Casper. Also surviving her are two sisters, Joy Carter of California and Norma Jean Long of Washington. She also leaves behind 7 grandchildren, 15 great grandchildren and several nieces and nephews.

Bea was preceded in death by her eldest daughter Linda Bessler, her youngest daughter Patty Skogen, as well as her parents, her two brothers Tom Shanley and Art Shanley and an infant daughter.

Memorials to Jason’s Friends Foundation, 340 W. B St. Suite 101, Casper, WY 82601. Would be appreciated as Bea was a strong advocate for children.

To order memorial trees or send flowers to the family in memory of Ellen "Bea" Spiva, please visit our flower store.