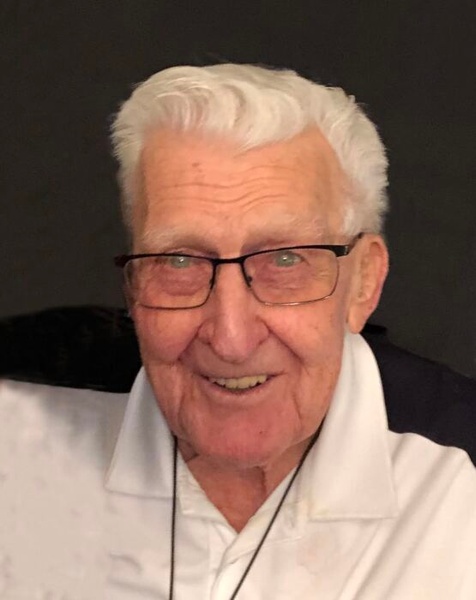 Frank was born September 13, 1932 in Salt Lake City, Utah, to Gustav Leopold Kelbch and Emma Paula Anna Kleinberg. Frank was raised by parents who came to the United States from Germany, to better their own lives as well as their future children and family. Frank was the middle child of three boys. He had two brothers, Richard and Raymond. Frank had a good life as a child, even though he grew up during the hard times of the Depression. His mother always made sure they had food on the table and clothes to wear. The entire family worked hard for what they had, and from that Frank learned an amazing work ethic which continued throughout his life. He graduated from Granite High School in Salt Lake City, Utah.

Throughout his early years he held several jobs, but his favorite job was working in a bakery, which he spoke of with fond memories. Frank was drafted into the Army to serve in the Korean War. When the Army learned of his German heritage and his ability to speak German, they sent him to Germany instead of fighting in the war. Frank completed his service in the Army and returned to the United States. Frank married his sweetheart, Velma (LaRae) Casper, in Salt Lake City, Utah on January 31, 1952. Together they had five wonderful children: Steven, Wendy, Terri, Larry and Brian.

Frank was employed as a furniture salesman at Granite Furniture in Salt Lake City, Utah. He climbed the ladder of success quickly. He was promoted to sales manager but soon realized he wanted even more. Through his hunting buddies, he learned that a family business was selling their furniture store, Plains Furniture and Carpeting in Casper, Wyoming. Frank was very interested as it was his dream to own his own business.

Frank and LaRae raised their five children and became prominent citizens in Casper. A favorite pastime for Frank was hunting. He hunted antelope, deer, elk, and even tagged a mountain lion. Cuts of the meat were always shared with family and friends. He and LaRae taught their kids to hunt and fish and to always love the great outdoors. Frank was a hunter, bow hunter, a fisherman, and a bowler. A frequent family adventure was boating. The kids grew up waterskiing all summer and taking trips to Lake Powell, where the family made wonderful memories. Frank excelled as a slalom skier, and taught his kids to waterski as well. Frank instilled his love for adventure in his children. Frank and LaRae would gather all the kids to go four wheeling in the jeep, or shooting rifles and handguns. Frank also found a new hobby, thanks to his oldest son, Steve. He discovered a never-ending passion for golf. Frank and LaRae were active members of the Casper Country Club for many, many years. Together they traveled all around the United States and Mexico golfing at beautiful resorts and watching pro golf tournaments. Life was booming and wonderful for Frank and LaRae. They were amazing business people as well as wonderful, fun parents and friends. They were enjoying life to the fullest. Sadly, LaRae passed away on May 8, 1992. This changed Frank’s life and all the family members’ lives, but Frank worked through it with the help of his children and friends.

Frank had a kind heart and was generous to a fault. He took great care of his family and he helped many people out when they were down on their luck. Frank was a prominent citizen and business man in Casper, Wyoming for over thirty years. He then retired, and turned his business over to his children. On November 23, 1998, Frank married Barbara McRae. They lived happily until Barbara’s death on November 25, 2015. Frank and Barbara were able to spend the cold Casper winters in the sunny state of Arizona. Frank really loved living in Arizona where the sun shined and he could golf to his heart’s content.

Frank and LaRae’s children are:

Two children, Terri of Denver, and Larry of Casper.

He was preceded in death by:

Frank is a member of the Church of Jesus Christ of Latter-Day Saints. Frank will be laid to rest next to his wife, LaRae, in a private interment, held at Highland Cemetery in Casper, Wyoming.

To order memorial trees or send flowers to the family in memory of Frank Kellch, please visit our flower store.