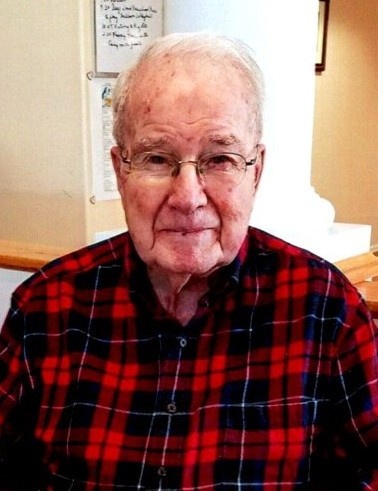 Frank D. Stewart, age 92, passed away October 8, 2020, at Meadow Wind Assisted Living Facility of natural causes.  Frank was born February 22,1928 son of Frank and Helen Stewart, in Marshall, Minnesota.  His family moved to South Dakota and he attended schools in Sturgis and Belle Fourche, and graduated from Rapid City High School in January 1945.

He was inducted into the Army Specialized Training Corps in March 1945 and later was assigned to detached service with the Coast Artillery Corps at their proving grounds at White Sands, New Mexico.  After discharge from the military in 1947, Frank attended the University of South Dakota, receiving his B.S. degree in Business Administration in 1950.  He was a member of the Phi Delta Theta fraternity.

On June 17, 1951, he married Elaine Glade in Ocheyedan, Iowa. Following their marriage, they moved to Casper, Wyoming and started their family.  Frank is survived by a daughter Gail Cheever (Gary) of Bountiful, Utah; daughter-in-law, Karen Stewart; four granddaughters; six great grandchildren; and five step-grandchildren.  He is also survived by a sister, Donna Pickup (Dick).  He is predeceased by his wife and two sons, Gary and Michael.

Frank worked for General Motors Corp from 1950 to 1953, when he started selling Pontiacs at Triangle Motors.  In 1956, he became associated with Evans Nagel Motors and later became General Manager and Partner of the dealership. He served as President of the Casper Auto Dealers Association and of the Wyoming Dealers Association.  In 1982 he sold his interest in the dealership and later became associated with Fred Dowd in the financial planning and brokerage business. He retired in 1995 to enjoy life with his family and four granddaughters.

He served on the board of directors of the Casper Chamber of Commerce, Open Spaces Commission (Parks and Recreation) and the Wyoming Highway Users Federation.  He was an active member of the Casper Lions Club since 1958, serving as President and Deputy District Governor, and on many committees.

Frank was most recently a member of Trinity Lutheran Church. He held various board member positions, was Steering Committee Chairman, President and elder of Mount Hope Lutheran Church.  He was on the Board of Directors of the Wyoming District of the Lutheran Church Missouri Synod when it was formed.

Memorials to the Stewart Music Endowment Fund of Trinity Lutheran Church or to the Allen H. Stewart Lions Camp for the Blind would be equally appreciated.

To order memorial trees or send flowers to the family in memory of Frank Stewart, please visit our flower store.