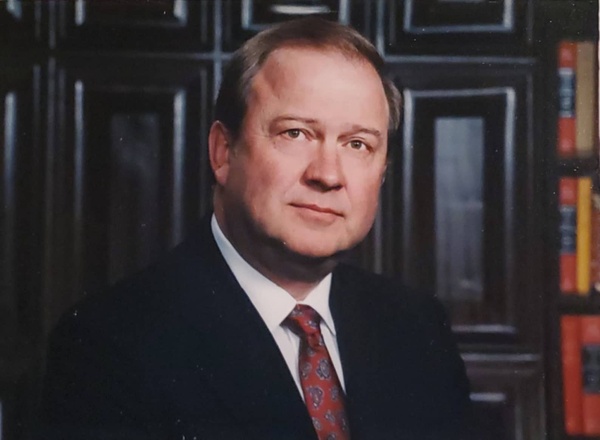 Gary Leon Stokes passed away at his lakeside home with his beloved wife, Vivian, on July 23, 2022. Gary was born on June 16, 1944 in Powell to parents Virginia (Jean) and Wilbur (Sonny) Leon Stokes. Gary became a big brother to his sister and best friend, Barbara. As siblings, they shared a nomadic lifestyle following drilling rigs across the Rocky Mountains and many adventures with their cousins (Jay, Tim, Lynne, Robyn) in Lovell hauling hay, building fence, and moving and feeding cattle. As a child, Gary worked alongside his admired Dad throwing chain while standing on a Hughes bit box on the drilling rigs.

Gary graduated from Hot Springs County High School in Thermopolis in 1962. That fall, he joined the Navy (1962-1966). After boot camp in San Diego, Gary attended Aviation Fire Control Electronics School in Millington, Tennessee. Upon graduation as Class Honor Man, he was transferred to Miramar Naval Air Base in San Diego, and assigned to Fighter Squadron VF142 (the Ghost Riders). Gary became a crew leader working on the F4B Phantom Jet. He served two tours to the South China Sea during the Vietnam War and his carrier group was involved in the battle of the Gulf of Tonkin that started the escalation of the war.

Upon completion of his service commitment, Gary used the GI Bill to earn degrees in Education and Mechanical Engineering at Northwest Community College (NWCC) and the University of Northern Colorado (UNC). It was at NWCC that Gary met the love of his life – Vivian Becquart. After a whirlwind romance of 10 days, Gary and Viv were engaged and married on September 5, 1970 in Cody. Gary was hired by Eastman Whipstock as an oil field well surveyor and directional driller. The couple relocated to Casper where their daughter, Leigh Andrea, and son, Justin Sonny Leon, were born and raised. Gary worked for Demco/Cameron Valve and retired as the Rocky Mountain District Manager after 34 years of service.

Gary and Viv retired to their lakeside home at Alcova and were active members of the Casper Boat Club (CBC). Gary was elected to the CBC Board and served as Commodore (1995, 2005) and as President of the Alcova Lakeside Estates Property Owners Association for 12 years (1998-2009). Gary was preceded in death by his parents and son, Justin. Gary is survived by his wife, Vivian and dog, Mojo; daughter, Leigh Stokes Shaw (Garth) and grandchildren, Hannah and Liam; sister, Barbara Van Vuuren (Alan) and nephews Mike (KaLani), Scott (Beth), and Todd (Anders) Van Vuuren; brother-in-law, Paul Becquart (Diane) and niece, Brenda Glode (Jimmy) and nephew, Brian Becquart (Shannon); and many beloved cousins and long-time friends. Gary was a giant of a man who will be missed by all who were lucky enough to know and love him.

A Celebration of Life will take place at Alcova later this summer.

To order memorial trees or send flowers to the family in memory of Gary Stokes, please visit our flower store.