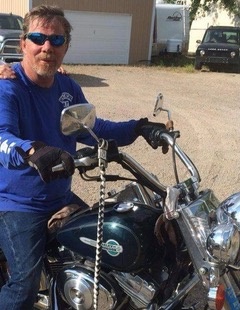 George was born to Leon A. Hall, Sr. and Peggy (Robinson). in Kimball, NE, 02/22/1964; their fifth born. The family moved to Farmington, NM, where George celebrated his 3rd birthday.  He attended school, there, enjoying the first year Sesame Street aired as his kindergarten. At the age of 12, he and sister Stephanie performed a Youth Ministries puppet show. George graduated Farmington High School in 1982. He enjoyed sports, playing baseball, football, and basketball. He excelled in wrestling and was on the diving team.

Upon discharge in 1993, George led a nomadic lifestyle, finding himself in NM, AZ, and WY.  He attended college in Rock Springs, finding the classroom setting terribly boring.  At heart, he was a farmer, briefly running a pig farm in Farson, WY. His love for all things John Deere never faded. He eventually settled in Casper, where he worked as a directional driller, then in construction - assisting in building the new KWHS. In 2018, he began work at True North Steel.

George enjoyed riding his 2002 Heritage, exploring the Black Hills and Top of the World, with his mom, little sister, and brother-in-law. He loved challenging himself with puzzles, skills games, working with plastic canvas and paracord, and completing the tasks assigned to him by his mom and her crafting friends. He designed and built fishing poles for Operation Christmas Child, and loved participating in Toys for Tots. In 2019, he became a member of Salt and Light Church, growing his relationship with the Lord.

He is preceded in death by sister Linda Sue Hall, maternal and paternal grandparents, and stepfather Arlen Reed.

To order memorial trees or send flowers to the family in memory of George Hall, please visit our flower store.