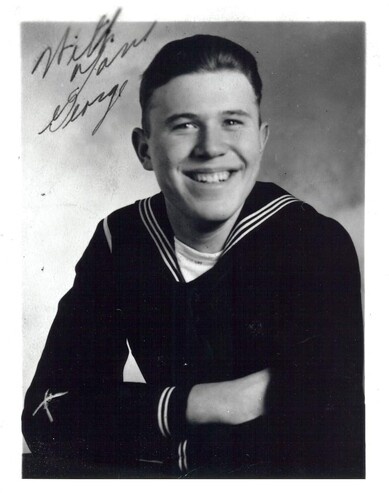 George Henry Zier passed away April 14th, 2022 at Central Wyoming Hospice in Casper WY. George was born in Hardin Mt. April 5th, 1926. He was one of thirteen children. He attended school in Bridger Montana.

As a young boy George worked many long and hard days on a ranch outside Bridger. George worked side by side with grown men to help provide for his family during the depression. George enlisted in the Navy at the age of 16. He served his years in the Navy as a Gunners Mate in the South Pacific during WWII.

After returning home from the War, George went to work in the oil field drilling wells in the Rocky Mountain Region. He advanced very quickly becoming a Drilling Foreman and Tool Pusher at a very young age. George was much respected and looked upon as a leader in his line of work. George had news articles in trade magazines about inventions he had developed for the oil field. During this time George met Delores Fritsvold they married and had five children.

In 1961 George moved a drilling rig to the Nevada Test Site and the contractor made him a great offer to stay at the testing grounds. He initially moved his family to Beatty Nevada, and then later to Las Vegas.

George spent many years working at the Nevada Test Site and finished his career as an operating engineer. George retired as a proud member of the Operating Engineers Local 12. He finally retired in 1981.

Even though he had retired, he kept himself very busy buying and collecting heavy equipment, he would rebuild anything that needed repaired and haggling for bargains in his retirement. George had moved to Topock Arizona in 1994 and spent many years enjoying the peace and quiet and socializing with his many friends at the Pilot Truck Stop.

In George’s later years he stayed with family in Henderson Nevada, then Casper Wyoming. He enjoyed sharing his many stories with everyone around, and everyone enjoyed hearing them. George’s mind was very sharp up to the time he had to say goodbye.

George was preceded in death by his father Henry Zier in 1959 and his beloved mother Katherine Zier in 1992, daughter Georgia and nine siblings.

A visitation for the family and friends will be held Thursday April 21, 2022 from 5 p.m. until 7:00 p.m. at Bustard and Jacoby Funeral Home Chapel.

Committal to follow at The Veterans Cemetery. After the Committal Services are concluded, a Reception luncheon will be held back at Trinity.

Memorial contributions can be made to Veterans association in memory of

To order memorial trees or send flowers to the family in memory of George Zier, please visit our flower store.