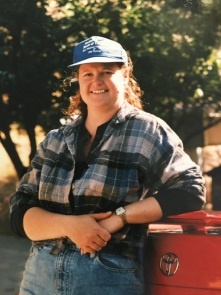 Gwen L. Hool, age 58 of Casper passed away October 14th at Wyoming Medical Center after a brief illness. Gwen was born in Hot Springs, South Dakota to Robert H. Reister and Myrna R. Wolvington on January 2nd 1962. She graduated from Kelly Walsh High School and attended Casper College majoring in two of her passions, that being Art and Photography

She was employed by 1st Interstate Bank for over 9 years. She met her husband Darrell Poisson in 1985. They married in May of 1988 and started a family having their son Darrell Poisson Jr of Casper in 1991.

She loved fishing and had her dream job being employed by Bullwinkle’s Bait and Tackle for 11 years. She began her journey in office administration working for numerous Non Profits in Casper such as Mercer House and Casa.

At the time of her passing she was employed by Casper Alcova Irrigation.

She remarried in 2001 to her husband Thomas Hool Jr.

She had a little girl passion for animals. Her dream of owning a Wild Mustang came true and she spent many an hour with her boy “Cisco”. She felt that horses are best in pairs so she later adopted her second mustang “Donkey”. There was never a No Vacancy sign when it came to an animal in need. She and her husband adopted numerous animals and developed a knack for restoring abused and neglected animals to prime health. Her earth bound fur kids Donkey, Mocha, Miss Kitty, Bobby Kat, and Gizzy will miss their mom.

When she was not working with her four legged fur kids she could be found photographing Wild Mustangs in their natural habitat. She would spend hours comparing notes with other photographers on wild horse family bands, especially those in the Adobe Town HMA.

Services will be held later this spring.

To order memorial trees or send flowers to the family in memory of Gwen Hool, please visit our flower store.