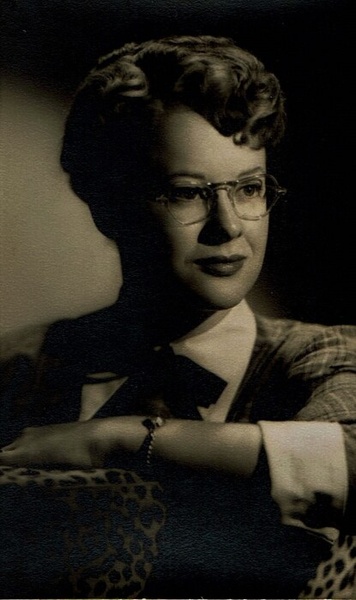 Hallie was born on June 27, 1927, on a farm in Powell, Wyo. to Jim and Lissie Cles. She attended school in Powell Wy, and Bozeman Mt, and graduated from the University of Wyoming with a B.S. in Botany and a minor in Geology.

In 1950, she married Gene Clardy and moved to Casper. Their daughter Colleen was born a few years later.  After his death in 1963, she returned to school for her teaching certificate and taught for 26 years at several schools in the Casper area.

In 1965, she married Donald A. Harris and became the mother of 3 additional sons, Jim, Dave, and Ken.

Hallie’s interests were reading, gardening, and needlework, but her passion was travel, exploration, and service. She and Don spent much of their later years traveling across the United States and internationally. They greatly enjoyed the historical and educational aspects of areas they visited and went on many trips through the Road Scholar/Elder Hostel program. One of their most memorable trips was to New York City to learn about the workings behind the scenes of the United Nations.

She and her husband Don deeply believed in the service of others and were regularly involved in Meals on Wheels and started the Heart of Wyoming, a chapter of Habitat for Humanity servicing the Casper Wyoming area.

Because of her love of books she regularly volunteered at Natrona County Public Library and Casper College Library.

Hallie loved the game show jeopardy, never missing an episode. She enjoyed how the show expanded her learning and understanding of things.

Her compassion for people began early in adulthood.  During the depression, Hallie would create lunches and hand them out to the many homeless men who go door to door in hopes of finding food or assistance.  She hoped to provide at least one decent meal for them that day.

As a nature advocate, she was a member of Murie Audubon Society.  Hallie was also passionate about equity, at one time involved in the American Association of University Women, one of the nation's leading voices in promoting equity and education for women and girls.

Hallie is survived by her daughter Colleen Dalton, currently residing in Seattle, WA, and stepsons Jim and Dave of Casper, Wy.  She is also survived by 6 grandchildren, and 10 great-grandchildren.

She is preceded in death by her parents Jim and Lissie, brothers Raymond, Alvin, Paul, husbands Gene and Don, stepson Ken, and grandson Aaron.

A memorial service will be held at the gravesite (plot 12-4-13) at Highland Park Cemetery, 1860 E 12th St, at 11:00 am.  In lieu of flowers, the family requests considering honoring her service to others by contributing to Meals on Wheels, Habitat for Humanity, or any local food bank.

To order memorial trees or send flowers to the family in memory of Hallie Harris, please visit our flower store.