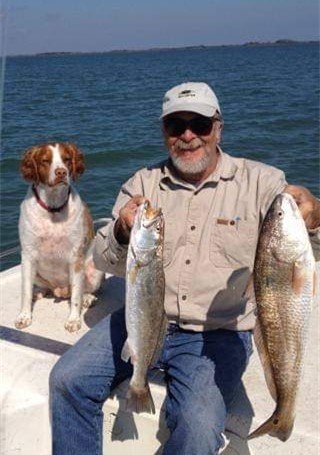 Jack Walz, 74, of Casper,  Wyoming, passed away on February 24, 2022 at Wyoming Medical Center surrounded by his loving family.  He was born February 11, 1948 in New Ulm, Minnesota to Elmer and Violet Walz.  He grew up in Winthrop, Minnesota and graduated from Winthrop High School in 1966.  Soon after he joined the Navy and served in nuclear submarines from 1966 to 1970.  He then attended Minnesota State University in Mankato and later became a deputy sheriff in Sibley County and then Blue Earth County before moving to Colorado and graduating from Mile High Court Reporting School.

In late 1976 he moved to Wyoming for work as a freelance court reporter and fell in love with the state’s beauty and wide open spaces.  In 1979 he married Merrilyn Wright, and the two began their family with daughter Leslie, followed two years later by daughter Laura.

An avid fisherman, Jack would often be found at one of the many lakes in Wyoming with his trusty Brittany.   When he wasn’t on the lake, he was on one of his motorcycles enjoying the open road.  Some of his happiest times were spent camping, taking trips with his family, attending reunions with his siblings, and getting together with his many friends.

Jack had a soft heart for nature and animals, a trait he passed down to his daughters.  He didn’t let a day pass without caring for his backyard sparrows, which he affectionately referred to as “sputzers.”

Always equipped with a joke, he had a knack for making everyone laugh.   To paraphrase his three-year-old daughter, Jack made life fun.  He lived life to the fullest and fought for it to the very end.

Jack is survived by his wife, Merrilyn;  two daughters, Leslie (Brad) and Laura (John):  siblings Steve (Carol), Sandy (Ron) and Sheila, along with several nieces and nephews and his faithful Brittany, Spanky.  He was preceded in death by his parents and two younger sisters, Renee and Debbie.

Per his wishes, no services are planned.

In lieu of flowers, the family suggests a donation be made to nbran.org, National Brittany Rescue and Adoption Network.

To order memorial trees or send flowers to the family in memory of Jack Walz, please visit our flower store.