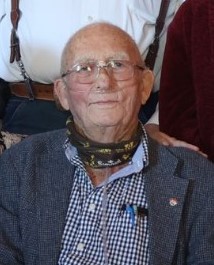 John LD Tanner passed away Friday, December 24, 2021 at the age of 86 surrounded by his family.

John was born September 20, 1935 and was the first of three sons born to Francis and Helen Budd Tanner of Big Piney, WY. His younger years were filled with helping in his family businesses, the Big Piney Mercantile, the family mortuary and raising cattle. During his high school years he was active in all sports and class Valedictorian, but the most important part of high school was that he met the love of his life, Shirley Diebler, who came to Big Piney from California.

While attending the University of Wyoming, he was a proud handler of Cowboy Joe and a very active FFA member. During the last year at the University of Wyoming, John was select to travel to England and Wales as part of the IFYE program, returning to the United States just before his wedding to Shirley in 1955. The first several months of their marriage they spent traveling Wyoming where John spoke to groups and organizations about his trip. He was so honored to be a part of the IFYE program.

John returned to the family ranch where he and his uncle, Joe Budd, raised Hereford cattle on the ranch John’s grandfather and grandmother homesteaded, John and Lulu (McGinnis) Budd. John loved working with cattle every day and was a passionate rancher. John and Shirley also raised two daughter, Lynn and Gayle and many young hired hands while on the ranch. After 40 years, John decided to leave ranching and contracted with the Big Piney School to provide the school systems maintenance, which he also found great satisfaction in. John and Shirley then decided it was time to retire and enjoy life, they spent the next several months touring, hunting rocks (a passed down family passion), traveling, and exploring Arizona. John soon found that he needed to go back to work and spent the next ten years with Williams Field Services basing his time out of the Wamsutter area. John and Shirley then retired for good, wintering in Arizona and return to Big Piney in the summer. John became a skilled wood worker and jewelry makers during his retirement years, he and Shirley also made many new friends while exploring the back country wilds of Arizona.

John served his community in many areas, a member of the school board, the Masonic Lodge, Eastern Star, the Korean Temple of Shriners and Elks. He was honored to be awarded the 2015 Big Piney Distinguished Alumni. John’s heritage, family and friends were the most important thing to him. Raising his daughters to work hard, have a love for life and the outdoors, to respect all and to serve your community. He loved more than anything family and friends and spending time with them. John and Shirley also loved to entertain and often had gathering at their homes for family and friends, telling stories and sharing his lifelong wisdom.

All who knew John were blessed by his generosity, his willingness to always help anyone, his down to earth ways, his honesty and his love of life. John is greatly missed by all his family and friends, but he is now with his two brothers who he so loved and many other family and dear friends who passed before him.

A graveside service and celebration of life will be held in Big Piney on May 20th, 2022.

To order memorial trees or send flowers to the family in memory of John Tanner, please visit our flower store.