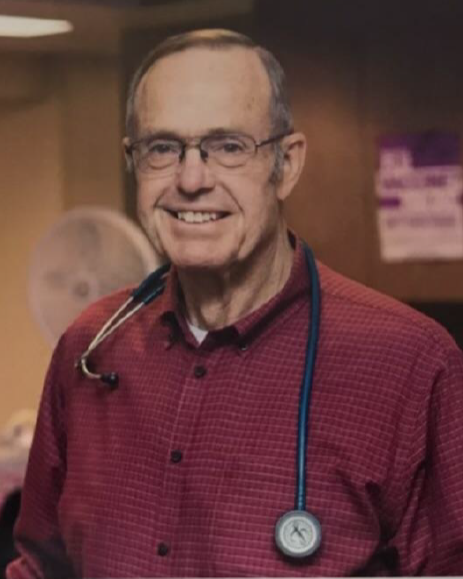 Two years ago he was diagnosed with three types of invasive cancers. Initially, he was not given
a very good prognosis. But he was stubborn, smart and received excellent medical care from
the Casper medical community.

Lew was born in Miles City, Montana. After moving around due to his father’s construction work,
he did attend Custer County High School.(Gratefully he attended his class reunions the last few
years in Miles City) He went to Montana State on a football scholarship. He was almost drafted
by the Cleveland Browns but the US Navy requested him first during the Vietnam conflict.
He served in the US Navy from 1966 to 1989 serving as a corpsman and eventually became a
Physician Assistant. He traveled the world serving his country from sea to shining sea.

On September 22 1972 He was awarded the Navy Achievement Medal:

“The Secretary of the Navy takes pleasure in presenting the Navy Achievement medal to
Hospital Corpsman First Class
Lew Howard Cooksey
United States Navy
For service as set forth in the following Citation:
“ For professional achievement in the superior performance of his duties as the leading petty
officer in the medical department in USS Long Beach (CGN-9) from 5 March 1971 to 24 March
1972. Petty Officer COOKSEY consistently performed his duties in an exemplary and highly
professional manner. Serving during a demanding period in the ship’s history. Petty Officer
Cooksey was instrumental in his department’s being in a fully combat ready and state
preparatory to the ship’s crucial 1972 Western Pacific deployment. Effectively re-organizing the
administrative procedures in his department, Petty Officer Cooksey established procedures
which resulted in greater availability of medical services to the crew. In addition, Petty Officer
Cooksey became active in the drug abuse problem, and was instrumental in establishing an
effective (amnesty) program on the LONG BEACH. His marked “people - oriented” manner
influenced those working with him, and was of significant benefit in maintaining crew morale.
Petty Officer COOKSEY’s inspired leadership, professionalism. And devotion to duty reflected
great credit upon himself and were in keeping with the highest traditions of the United States
Naval Service.”
For the Secretary of the Navy,
NELS C. JOHNSON
Vice Admiral, U.S. Navy
Commander FIRST Fleet

I think this summed up his devotion to family, friends, and country. He always went above and
beyond for people. He was skilled in his medical profession but also excelled in home
construction, electrical work, plumbing, welding, car repair (engine and body work),highway and
bridge construction, Yes- he built a runway,too - in the middle of the Nevada desert. There was
little he could not do or achieve if he wanted.

He was almost drafted by the Cleveland Browns but the US Navy requested him first during the
Vietnam conflict. He had an amazing military career, he had the honor of serving as medical
staff for President Ronald Regan while the president rode horses at Quantico Virginia Marine Corp
base. He did not tell his family this until some time in the 2010’s . He took his confidentiality
seriously. There is so much he did that we will never know. But that was also what made him the
man of honor he was.

When he moved to Casper Wyoming in 1992, he and his wife truly put down roots. He had an
amazing medical career, working at InstaCare, the VA Medical Clinic and then at Memorial
Hospital of Converse County in Douglas. Lew took care of so many people. He had kids run up
to him in stores happy to see him. Lew also helped out at Silver Fox Steakhouse (where his wife
worked). He enjoyed collecting John Deere Tractors, trucks, cars, trailers, cement mixers,tools,
things he got a deal on and so on and so on. His property became Lew’s Red Neck Emporium
of curiosities. But he also knew everything he had and he was always willing to help others.
And people knew they could rely on him to help.

He was one of a kind. He is now on the road again.

To order memorial trees or send flowers to the family in memory of Lew Howard Cooksey, please visit our flower store.