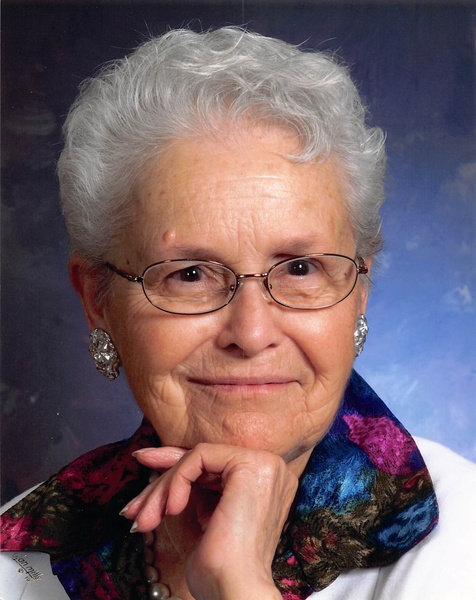 Lucille Helen Walt: October 11,1931-August 8, 2022 at the age of 90, slipped quietly from the arms of her family into to the arms of her Savior Jesus Christ.  She was one of four daughters of Henry and Amelia Walt born in Quinter Kansas where she lived until moving to Fort Morgan Colorado her freshman year of high school. Lucille met the love of her life, James Albert Boies,  her senior year in high school.  They married September 26, 1949.  Lucille was the mother of 5 children,  James Emmett (Sandy), Tim Henry (Laurie), Maureen Lucille (Jarel Roy Cellmer), Mary Lynee Gilletti, and Kevin Joseph.  All born in 6 years she would add.

Lucille was the Ultimate homemaker. She was one of  the last of her kind as she was a seamstress, chef, baker, nurse to her family, secretary, volunteered at school functions and was daddy's right hand with the family mortuary business.  She learned how to feed a family of 7 on a shoestring budget. She was doing hamburger helper before there was a thing on the market. Everything was made in her kitchen.  She canned vegetables grown in her garden, made homemade bread and served all with love.  Her holiday dinner were amazing. She was humble about her talents. She served the Bishop of the Pueblo diocese Easter dinner while living in Walsenburg Colorado.

Lucille was a woman of faith, giving of herself not only to her family but to many others through her Eucharist Ministry in Walsenburg, bible studies in Walsenburg, Fruita, and Casper as both teacher and student.

Lucille had a great sense of humor.  She was an avid card player. She never past an opportunity to challenge her kids or grandkids to a “hot” game of Cribbage, Pinochle, Rummy, Uno, and her latest Hand and Foot.  She loved to beat the socks off us, but was just as delighted to see us win.

Lucille gave the gift of life to her children. She always said we were just lent to her to raise in the best way she could. She allowed us to make our most miserable mistakes but was always there to pickup the pieces. She is going to be sorely missed by her family.

In 2013, Lucille moved to Casper where she lived independently until October 2021.  Her last months of life were spent living with daughter Reenee and son-in-law Jarel Roy. Jarel was the day-to-day caregiver assuring her smoothie was just right and that there was enough honey in her tea until the last  few weeks when Reenee retired from work to resume full time care of mom. For this the siblings are forever grateful. All of Lucille's children were able to personally express their love for her prior to her getting her wings to fly to heaven in ways only they could.

Lucille will be missed by all family and friends.  Rest in the arms of Jesus Mamma!

We would like to thank all the wonderful doctors that helped our mother.  Doctor Joseph Michelson, Dr. Fluture, and all the doctors and staff at Wyoming Cardiopulmonary; Doctors Singh, and Chacola, and Annette at Wyoming Nephrology; Doctors Krmpotich, and Milone; The staff at Caring Edge, Especially Tannie RN. These are just a few, but Mom appreciated each and everyone and felt blessed to have such great medical care. She said many times she was glad she moved to Casper.

Graveside services at a later date in La Veta Colorado where Mom and Dad will rest Together Forever.

In lieu of flowers donations can be made to Caring Edge Hospice 5870 East 2nd Street Casper, Wyo 82609 or to the charity of your choice in her name.

To order memorial trees or send flowers to the family in memory of Lucille H. Boies, please visit our flower store.