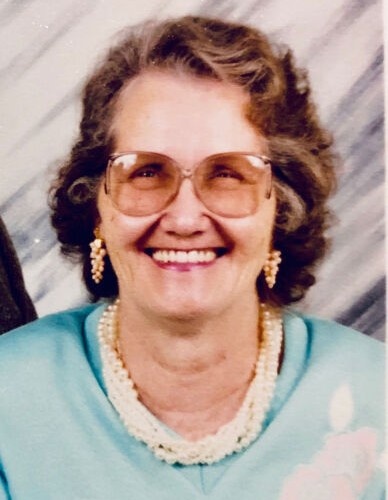 Margaret enjoyed visits from most of her family in Casper a few days before she left to join her husband early October 23, 2020.

Margaret Helen Jones MacMillan Strohl was born the youngest of 5 children at her parents’, Harry L. and Lotta E. Jones, home on March 2, 1925 in Lance Creek, Wyoming. The Jones family later moved to Glenrock and then Parkerton, Wyoming. She graduated from Glenrock-Parkerton High School in 1943. She then moved to Vallejo, California and worked at Mare Island, helping with the war effort. There, she reconnected with W. R. (Bob) MacMillan, who was enlisted in the Army. They were married in Los Angeles, California. After the war, they moved back to Wyoming. Margaret worked at JC Penney’s in Cheyenne, Wyoming. They had two sons, Fredrick Neil and Raymond Lynn MacMillan. They later divorced and the boys moved to Parkerton to live with their grandparents.

Margaret lived in Casper where she worked at JC Penney’s and Mountain States Power (later Pacific Power and Light, now Rocky Mountain Power) where she met Joseph L. (Buster) Strohl. They were married November 3, 1951. The happy couple and two sons first lived at a rental home on South Poplar Street in Casper. After the birth of another son, John Joseph (Jack) Strohl, they purchased a small house at 311 South Fenway. Then came the girls, Susan Jeannene, Patricia Luanne, and Barbara Elizabeth.

The family was introduced to Christ in a fledgling church which met in the home of Stewart and Marilyn Cook. Margaret was emersed into Christ. She brought the family with her to Sunday School and Church that met first at the Richard Street Christian Church then later at Paradise Valley Christian Church. Margaret continued praying for her family until the day she left us to join her savior and her husband in heaven.

The tiny 3 bedroom house was becoming tight, so the family made their final move to a much larger home at 1236 South Jefferson in 1959.

When all the children were in school, Margaret went back to work starting in the Natrona County High School cafeteria. Later on, she would spend 12 years at U. S. Welding Supply. She would eventually take early retirement at the age of 62.

Margaret enjoyed working with her husband and children in the Boy Scouts and Girl Scouts. She enjoyed crafts, swimming at the YMCA, dancing with Joe at the Elks Lodge, and working with the Casper Does #38, which she joined in 1972. She was elected President in 1984. The Casper Does hosted a Grand Lodge for all the Does in the U.S. in 2000.

Services will be held at 2:00 p.m. on Saturday, October 31 at Bustard’s Funeral Home. Interment will follow at Memorial Gardens, and a reception at Yellowstone Garage from 4 to 8 p.m.

To order memorial trees or send flowers to the family in memory of Margaret Strohl, please visit our flower store.