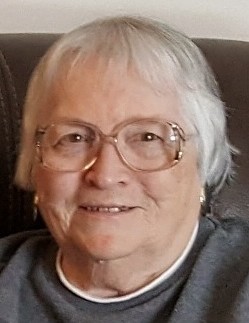 She will be missed dearly by her family, friends, and all who loved her.

Marian was born in Seattle, Washington on March 12, 1934 to Patrick Fleming and Ethyl Irene Angle.

As a young girl, she moved with her mother to Minnesota where her mother met and married William August Peters.

She was a 1952 graduate of Jasper High School in Minnesota.

Marian married Donald Richard Hegdahl in Jasper, Minnesota on August 20th, 1955. They were married for over 60 years.

They lived in Sioux Falls, SD then moved to Mitchell, SD in 1965 before finally moving to Casper in 2013 to be nearer to family.

She is survived by: Her sisters Nona Faye Benenga and Ethyl Mae Bolluyt and brother William August Peters Jr, all of Minnesota;

And one great-great grandson Weston Phillips.

Marian left our world as a loving mom and grandma with a sweet disposition, always smiling, making jokes and laughing.

She was a Lions club member and long-time volunteer for Meals-on-Wheels in both Mitchell, SD and Casper, WY.

She was preceded in death by her husband Donald on November 19th, 2015.

A celebration of her life will be held in Casper this summer at a date yet to be determined. All will be welcome.

If so moved, please make a donation to her favorite charity, Meals-on-Wheels, in her memory.

To order memorial trees or send flowers to the family in memory of Marian Hegdahl, please visit our flower store.