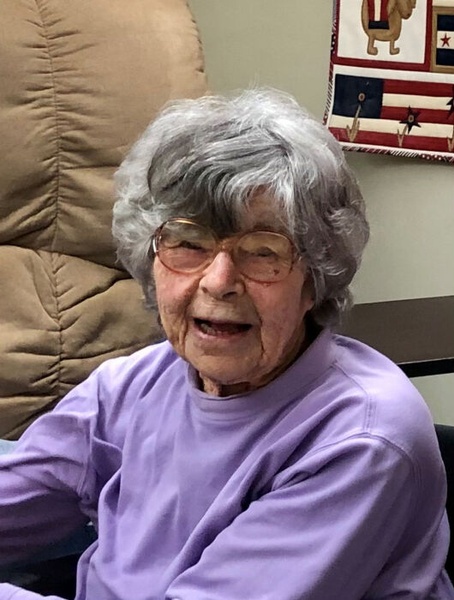 Casper - Long time Casper resident, Mildred Burgess, died peacefully Sunday November 15, 2020 at Shepherd of the Valley Nursing Home at the age of 101. Originally from Houston, Missouri she was born October 6, 1919.  At age 16 (1935) she arrived in Wyoming. She worked with her father, mother, and brother at The Stone Ranch west of Casper.

During WWII Mildred become manager of the downtown Walgreen’s soda fountain.  She met the love of her life, Frank Burgess at that soda shop after he returned from his duty in the army during WWII.  They were married March 1949.

They shared a common interest in the restaurant business.  Mildred worked at the Brig’s Drive Inn.  Hotel restaurants at The Townsend, Gladstone, and Henning.  Working at the Holiday Inn, she had the privilege to serve actors John Wayne and Lee Marvin during the filming of Hell Fighters.

Frank and Millie owned The Snow-White Drive Inn, Frank’s Pie Shop, and Lynn Lee’s Steak House.  She retired from the Natrona County School District and had worked at CY JR High in the cafeteria.

Mildred enjoyed gardening, camping, and fishing.  Most important to her has always been her family. She was married to Frank for 40 years before his passing in 1989.  She raised two sons, F. Lynn Burgess and Lee (Terry) Burgess all of Casper and is survived by them as well as grandchildren Todd, Trent, Kevin, Andrew, Robbie, and Amber, and numerous great grandchildren.

She is preceded in death by her parents, brother, and husband.

Services will be held at the Oregon Trail Veteran’s Cemetery in Evansville on Friday November 20th at 1:00 pm.  Bustard & Jacoby Funeral Home are in charge of arrangements.

To order memorial trees or send flowers to the family in memory of Mildred Burgess, please visit our flower store.