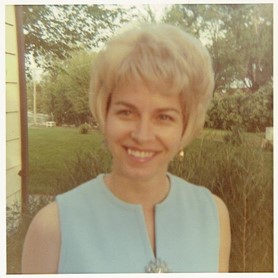 Nadine left this world going to meet D.W. on Monday, November 29th, at 5:55 p.m. She’s up there having fun with all her family and friends who were waiting for her on the other side. She was born the second of three girls to Art and Bonnie Scheer on February 16th,1935, and attended school in Prairie Center. She finished high school in Torrington, modeled clothing with her good friend Susie Swanson, and worked at Mel’s News. She met and married Curtis Herdt and they had two children, Cindy {Herdt} Swanson and Tracy Page. They later divorced and she attended Eastern Wyoming College for a time. Later on, she worked for Montgomery Wards as a clerk and would unload freight in high heels and high fashion. She married Derald “D.W." Page forming a blended family. She advanced her career by moving to Dr. Morgan’s eye clinic working as a bookkeeper and office manager. Larry Goddard purchased the clinic, and eventually sold the clinic to Grant Jones. She continued to work for several years.

Nadine enjoyed having a great time with family and friends.She was a member of the American Legion, Moose Club, and Elks Club. She loved attending parties, being on a bowling league, golfing, dancing, boating, and skiing, entertaining, jewelry and bling, dressing to the 9’s, and never leaving the house without her hair done and her “face on.”

She was extremely happy to be baptized in Glendo Lake by the Cowboy Church Minister. For a time, she lived between her cabin at Glendo Lake and Casper. Meadow Winds Assisted Living would become her home in the end where she was always close to her family. She was an excellent bookkeeper, a perfectionist, and lived her life on her terms. She was independent, headstrong, and had a sense of pride in herself. She was a lucky one. She did it her way all the way to the end. She was the boss…

Nadine was preceded in death by her husband of fifty years; D.W. Page, her sister Arbonna Davis, her half-brother Jim Scheer, her great nephew Jimmy Scheer, and her Parents Art and Bonnie Scheer. She is survived by her sister Linda Nichol of Lingle, step-brother Jerry Baker of Gillette, numerous nieces and nephews, and her children; Cindy Swanson {Mike} of Casper, Tracy Page of Casper, Greg Page of Casper, her grandchildren, Lesley {Swanson} Kozola of Casper, John Swanson {Andrea} of Casper, Isaac Swanson {Becky} of Casper, Lane Page of Denver, great grandchildren, Braden Kozola, Zoe Kozola, Dominic Swanson, Benjamin Swanson, Gabriella Swanson, and Abram Swanson, and numerous other family and friends. She loved her grandchildren and great grandchildren very much. She will be missed by many.

Services will be held in Torrington, Wyoming at Colyer’s Funeral Home on Saturday, December 11th at 10:00 a.m. A celebration will follow at the Cobblestone Hotel and Suites.

To order memorial trees or send flowers to the family in memory of Nadine Page, please visit our flower store.