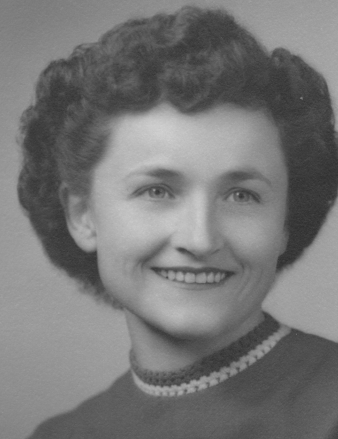 Norma was born in Belzoni, Oklahoma to Arthur and Laura (Goodin) Morrison on July 4, 1930.  She went to school and graduated from high school in Rattan, Oklahoma in 1948.  Encouraged by her oldest brother "Boots," she went on to earn a nursing degree in Texas at the Amarillo School of Nursing.  After nursing school she enlisted in the Army Nursing Corps and received officer training at Fort Sam Houston, Texas and then completed military duty at the Fitzsimmons Army Medical Hospital in Denver, attending to TB patients returning from Korea.  In Denver she met Dave Zagurski and they married in 1954.  She left the Army on honorable discharge when Dave found a job in Casper, Wyoming.  She enjoyed knitting, sewing, reading, growing beautiful roses, camping, fishing, dancing and raised two daughters. Norma worked for Natrona County Memorial Hospital (now Wyoming Medical Center) and then for Dr. Kenneth Roberts for close to 30 years and Dr. Frederick Cubin for 10 years.  She was a member of the First Presbyterian Church, was a Sunday School Teacher. and later a deacon. She enjoyed being with family, attending her grandchildren’s sports events, and loved watching football, baseball, soccer, hockey and basketball.  She had a great sense of humor and loved her family.

She is survived by her daughters Barbara (Reed) Rooney of Casper and Carol (Barry) Stark of Cheyenne, her 4 grandchildren Gavin (Nicole) Rooney of Laramie, Allison Rooney of Casper, Christine Stark of New Zealand, and Justin Stark of Bremerton, Washington, and 2 great grandchildren, Cathleen and Dylan Rooney of Laramie, and 1 sister, Barbara Stalnaker of Norman, Oklahoma and numerous nieces and nephews.  She was preceded in death by her husband, parents, 5 brothers and 2 sisters.

Funeral service for immediate family and internment of ashes will be held at Oregon Trail Veteran's Cemetary at a later date.  Bustard’s Funeral Home will be handling the arrangements.  No reception is planned.

To order memorial trees or send flowers to the family in memory of Norma Zagurski, please visit our flower store.