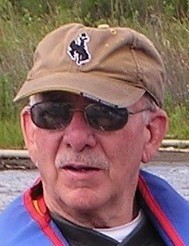 Jim was born September 29, 1938, in Powell, Wyoming to Paul and Marjorie Decker who farmed in the Powell Valley.  He graduated from Powell High School in 1957 and married Janet Loomis on December 29, 1957.  After their marriage, Jim and Janet moved to Heart Mountain where they farmed and began their family.  Jim attended Northwest College during the early years of their marriage.

After farming a few years, Jim and Janet decided to seek other opportunities in life.  After briefly considering an opportunity to move to Australia to raise sheep, the family moved to Laramie, Wyoming where he obtained a Bachelor of Science degree in agricultural business.  Jim’s career encompassed a short time working for Great Western Sugar in Colorado, Wyoming and Montana before he went to work for the U.S. Department of Agriculture. During the time he worked for the Department of Agriculture, he spent a number of years at the national office in Washington, D.C. and obtained a masters’ degree in Economics from American University.  In 1988, Jim and Janet moved to Casper where he continued to work for the Department of Agriculture until retirement in 2001.  After retirement, they moved to Powell and then back to Casper in 2015.

Jim had a successful and meaningful career; however his career was not the center of his life.  Janet was the love of his life from high school days until their last days together and beyond.  Whatever Jim treasured in life revolved around what Janet and he loved doing together. Camping at the Wapiti campground on the North Fork of the Shoshone River was a most treasured activity. He was a life-long fisherman and especially loved fishing in Alaska during his retirement years.  Family was everything to him.  His sons and their families can each recount numerous times Jim and Janet dropped everything to help them as needed.  In his last years he found great joy in his great-grandchildren.  Above all, was his enduring faith in God and his Christian walk.  Jim served as an elder of the Mountain Road church of Christ in Casper and also for the Cody, Wyoming church of Christ. He was a loving husband, caring father and dedicated Christian.

In accordance with Jim’s wishes, he has been cremated.  A memorial service is being planned in July 2021 at the Cody church of Christ.  As Jim and Janet desired, they will be reunited again in the waters of the North Fork of Shoshone and in heaven as faithful servants of the living God.

To order memorial trees or send flowers to the family in memory of Paul Decker, please visit our flower store.