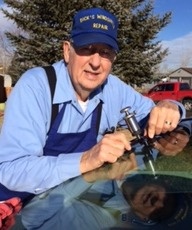 Born in Nettleton,Arkansas he was the son of the late Ben Allen Smallman and Eunice Pepper Smallman.

Dick, as he was known to family and friends , was a successful  business man.  His last business was repairing windshields. He finished his education in the military service.

The Smallmans were  hardworking cotton farmers of Scottish descent.  Dick grew up in the fields picking cotton, alongside his father and his brothers.  “ Going to the gin”,  meant pay day, getting paid for all of the cotton picked.  This is one of his favorite memories as a boy.  Even though this was hot, hard work, the brothers played around, tossing cotton balls at each other.

He enjoyed playing his guitar and singing country western music.  He also enjoyed tinkering with electronics.

He is preceded in death by his  son Mark Allen Smallman and his brother Clarence Smallman.

He is survived by his wife Brenda Smallman of Casper WY,  his son John Michael Ridley and family of Baltimore MD, and his brother  Lawrence Smallman and family of Arkansas.

He will be inurned at the Oregon Trail State Veteran’s cemetery.

To order memorial trees or send flowers to the family in memory of Richard Smallman, please visit our flower store.