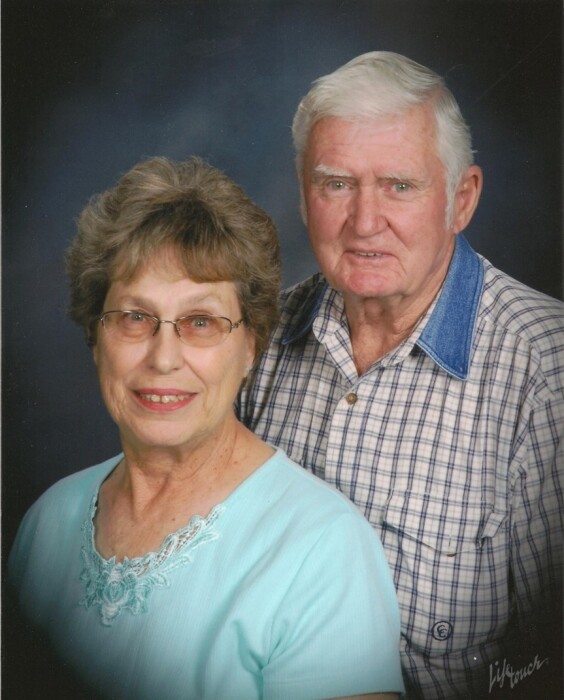 Richard (Dick) Lagene Stairs died October 15, 2020.  He was born March 25, 1937 in Callaway, Nebraska to Lawrence E. and Bessie Eileen (Smith) Stairs. He grew up in Pavillion and Evansville, Wyoming.  In 1962 he went into the Army and was stationed in Mineral Wells, Texas. He worked as a speed radio operator. He received a sharp-shooter rifle badge and a medal of good conduct.

Rosemary (Johnson) Stairs died February 5, 2021.  She was born in Douglas, Wyoming on December 17, 1939 to Lester W. and Rose Johnson. She grew up in Converse county, Wyoming graduating from Douglas High School.  She attended Park Business school in Denver, Colorado.  She met Ronald G. Clapp and they married and had two children Regina and Rodney.

Dick and Rosemary met in the late 60’s and had found their soulmates.  They married October 6, 1969.  Their family became complete with the birth of their son, Richard D. Stairs.  Their marriage and family were their number one priority.   In the 90’s they became beloved grandparents to Emily, Matthew, Sean and Logan.

Richard worked hard all his life and had several different jobs.  After many years with Fleischli Oil, he retired in 1999.  He kept busy after retirement with his many projects and hobbies. Blessing those who knew him with his expertise and designs.

Rosemary worked in the insurance industry for many years including Lange’s Western Agency as an agent and bookkeeper.  She was always creative and after retirement she continued to create many beautiful handmade articles, which she generously shared.

Dick and Rosemary became snowbirds for several years going to Black Rock RV Village in Arizona each fall.  They were able to spend more time with Rodney, travel the Southwest reconnect with family and make many new friends.  They also traveled to South Carolina, Baltimore, and Washington D.C. When they were back in Wyoming, they loved to attend local events, garage sale, visit with friends and of course, spend time with family and attend all their events. They made friends wherever they went.

Alzheimer’s disease took away Rosemary’s ability to live in the family home.  Life Care Center in Casper became her new home.  Known as the ‘love birds,’ Dick visited her at least twice a day every day. They were married 51 years.

They enjoyed attending Highland Park Community Church where a memorial service will be held Friday, June 11 at 10:00.  Following a reception at the church, interment will be held at 12:30 at Oregon Trail Veteran’s Cemetery in Evansville, Wyoming.  A link will be available to watch the service via ZOOM.

To order memorial trees or send flowers to the family in memory of Richard and Rosemary Stairs, please visit our flower store.