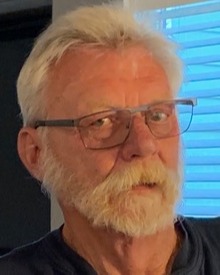 Long-haul trucker Rick LaVerne Smith traveled his magic mile, reaching his final destination on Saturday, December 3rd, 2022. His trek through life had many eclectic stops, and his witty quips and dry chuckle will be missed across the highways, byways, badlands, and mountains.

His trip began on September 12, 1946 in Perry, Iowa. Rick was born to Lois Louise (Kenan) Smith and adopted by Alvin Gilbert Smith, growing up in a family of six children. Rick was spoiled by his grandma, Jessie (Shepard) Kenan, and they had a special bond. He spent time helping her do laundry and iron sheets for her boarding house and did her yard work. He took her to all of the new Elvis movies. In Iowa’s sweltering summers, he would shuck corn for money and also worked at the family moving company, Gib Smith Moving and Storage. It was here that he realized he liked to be on the road, moving and going new places. Later, he began driving semis for his parents and discovered Wyoming.

Long days and nights on the road didn’t stop Rick from putting down deep roots at home. He was valued and adored by all three of his children, all eight of his grandchildren, and he was especially revered by two new great-grandchildren who always knew where to go for treats. Outside his home, his presence was just as constant: neighbors always knew they could rely on Rick for a helping hand, colorful conversation, or courtesy lawn maintenance (the first two were complimentary; a six-pack would ensure the latter). He had his own distinct vernacular and phrases we all grew to understand: rainlocker (shower), cackleberries (eggs), Davenport (couch), fart pellets (beans), load of fence post holes (empty truck),  Petercar (Peterbilt), K-whopper (Kenworth), Freightshaker (freightliner), wiener wagon (Werner truck), Misery (Missouri), dead buzzard day (Thanksgiving), eyeballs (glasses) and fart sack (bed). There were inappropriate ones, too, that he’d share just to make a person squirm.

On November 23, 1979, Rick’s rig took on a new passenger, and he’d never spend much time alone again: he married Linda Sue Drott in Wheatland, Wyoming during a bone chilling blizzard. There was 30 inches of snow, wind, and lows around -12 Fahrenheit, but the weather wouldn’t stop them from taking their vows. The two spent all the time they could together. Rick’s adoration for his bride was palpable and unwavering. Linda’s influence made him a better father and family man. They shared a love of horses, animals, and nature that tied them together. In Chugwater, they were known for riding their horses down to town for a drink at the local watering hole. Rick’s restless need for movement afforded them the opportunity to live in various places such as Perry, Chicago, New Orleans, but, eventually, they settled in Gassville, Arkansas by Linda’s parents. Until Linda’s death, there wasn’t a day that they didn’t either spend together or speak on the phone. Once widowed, Rick moved to Casper, Wyoming to be closer to his children and grandchildren.

Always a seemingly quintessential “man’s man,” Rick was known for his love of drinkin’, smokin’, mechanicin’, and ranchin’. However, those close to him fondly remember the soft interior which was usually poorly hidden by the tough front; in fact, of the Irish truckers in the world, Rick was certainly the gentlest. He’ll be remembered for sneaking food to animals, exchanging mischievous winks with kids, salting his beer, too many green air freshener trees in his truck, playing endless hands of cribbage and solitaire, his homemade chicken noodle soup, and unmercifully teasing those around him with his antics. However, those closest to him will miss his fierce loyalty and the warmth of being loved unabashedly with his whole heart.

Rick was preceded in death by his wife Linda (Drott) Smith; his parents Lois (Kenan) and Alvin “Gib” Smith ; his brothers George and William “Bill”; his sister Eleanor (Smith) Roberts; and his stepdaughter Christina (Wollesen) Felton. Rick is survived by his children Tabitha and Tye Herron, Kenan Smith, and     Robert and Lacy Smith all of Casper, Wyoming; his grandchildren Taylor and Krystal Herron, Paige and Nelson Harmon, Talon Herron, Kameron Westerberg, Kenan Smith, Kayden Smith, James Byrd, and Judy Smith; great grandchildren Easton and Logan Harmon; his sisters Sarah and John Neu of Milford, Ohio and Dixie and Dennis Nelson of Gravois Mills, Missouri; his ex-wife Linda (Wollesen) McClure of Casper, Wyoming, and numerous nieces and nephews and cousins. But he will be remembered by so many more: all of the neighbors who were offered a yellowjacket and some laughs; all of the golfers he embarrassed with his unorthodox- and remarkably accurate- stroke; all of the well-intentioned grocery clerks whose attempts at cordiality when asking, “How are you?” elicited responses like, “TERRIBLE. How are you?”

A cremation has taken place, and this summer his family will host a memorial where Rick and Linda’s ashes will be spread together, as they belong.

To order memorial trees or send flowers to the family in memory of Rick LaVerne Smith, please visit our flower store.