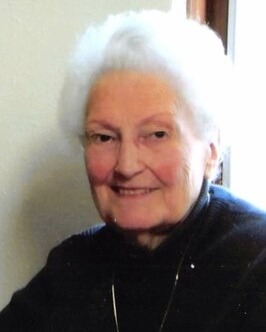 While a senior in high school she was employed by G.M. Penley and C.M. Canfield; she later operated the elevator at the ConRoy Building, and ended her employment career at Stanolind Oil and Gas Company.

She is survived by her son Michael Evers (Mary Beth), daughter Lisa Evers, two grandsons Joseph (Elise) and Nicholas Evers (Rachel) and great-grandson, Weston, who was the joy of her last two years.

She was preceded in death by her husband, John; her parents and her sisters: Tillie Racich, Helen Dolenc, Dorothy Koch and Lillian Dvorak; and her two brothers, Frank and Thomas Racich.  She is the last of the seven Racich children.  She is also survived by many nieces, nephews and cousins.

During her last few months Ruby received wonderful care from the folks at Mel’s Helping Hands. During her last few days, Ruby was cared for by the staff at Central Wyoming Hospice. Both of these caregiving organizations are deeply appreciated by her family.

Ruby will be remembered for her generosity and her heart for those less fortunate.

A celebration of Ruby’s life will be held at St. Stephen’s Episcopal Church, 4700 S. Poplar St. in Casper, November 5th, at 1:30 PM. A reception will follow in St. Stephen's Parish Hall.

To order memorial trees or send flowers to the family in memory of Ruby Ann Evers, please visit our flower store.