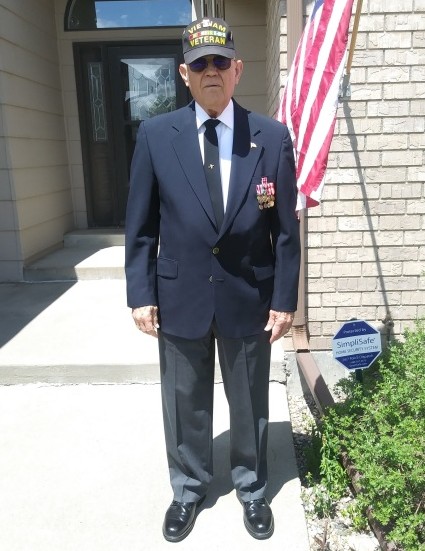 On Saturday, September 4th, Russel K. Farrow went from the arms of his beloved wife of 61 years straight in the arms of Jesus his Savior.

Russel was born to Ivan “Lynn” Farrow and Ruth (Mitchell) on July 8, 1938 in Mason City, Iowa. Russel enlisted in the National Guard at age 16 with special permission from his mother. It was at age 16 that he also graduated from Adel Highschool Class of 1956. Russel had a very distinguished military career. For 22 years he served his country. He was known as a mustang. He began his career as an enlisted military police. He then proceeded to Warrant Officer for nuclear weapons, attaining the rank of Warrant 2. He then received his direct commission as an Officer, retiring as a Major.

The Military was not Russel’s whole story. After retiring at the ripe old age of 38, he and Bev bought a farm in Rockwell, IA. While farming he also worked at North Iowa Area Community College, teaching agriculture. He then became a loan officer for Farm Credit. He was employed there for 17 years, beginning as a loan officer, transferring to Haman Resources Training and Development.

It was in 1994 that Russel and Bev moved to Casper, WY, where Russel was employed with Western Vista Credit Union, Highland Park Church, and completed his certification as a financial Planner.

Russel was a devoted, loving and proud family man. He received his strength and support from his wife of 61 ½ years and in return he gave her his strength and confidence. Theirs was truly a love match made in heaven. To this union two daughters were born, Becky and Melinda. He was always proud of his girls and supported them unconditionally.

Russel accepted Jesus as his Savior in 1974. He was a faithful and loved servant. He served God as a Sunday School Teacher, Educational Director, taught Bible studies, Deacon, Church Financial Officer. He was a member of Toast Masters and loved flying airplanes.

His pride and joy was first and foremost the love of his life, Beverly, followed closely by his daughters, grandchildren and great grandchildren.

He is preceded in death by his daughter Melinda Farrow, his brother LeRoy Farrow, parents Ivan Lynn and Ruth (Mitchell) Farrow, Grandmother Irene Fuhr and numerous aunts, uncles and cousins.

In lieu of flowers the family requests donations to be made to Disabled American Veterans or the Children’s Miracle Network Hospitals.

To order memorial trees or send flowers to the family in memory of Russel Farrow, please visit our flower store.