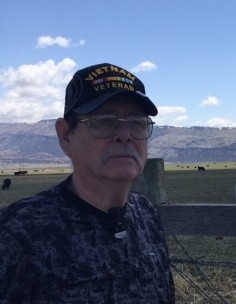 Beloved Casper native, Scott Edward Mills died peacefully at his Casper home on Sunday morning, January 24, with his brother, Mark and nephew, Jack Garson at his side.  Given his birthday fell on the same day as Abraham Lincoln’s, his family thought he was pretty special.   His siblings truly regarded him as the “Best of Us.”

Scott graduated from NCHS in 1968 and worked on the Strong Creek Ranch during the summer of his high school years.  He joined the Navy in 1969 and spent four years defending our country during the Vietnam War. He served on the aircraft carrier, USS Kitty Hawk working as a jet airplane mechanic.    After the war, he was employed in the oil business in Cody, WY, where he started his own electronic repair business.  He eventually returned to his hometown of Casper and became the primary caregiver for our Mother before she passed in December of 2001.  Scott was well known in his neighborhood and throughout Casper as “Mr. Fix It!”  He was a “learn by trial and error” guy, who could fix anything and everything.  One of his greatest strengths was his ability to problem solve in any situation!  He loved the outdoors of Wyoming.  His many hobbies included snowmobile racing, hunting, & fishing. He was proud to be a member of the Wyoming Pioneers Association.

Scott was a “Super Uncle” to his nieces and nephews. He taught them the value of patience, always extending his sense of humor.  He also taught them a lot about hunting, fishing and shared his knowledge about electronics.  When inquiries were made as to what the doctor had to say about his condition, he replied, “He said, to take 2 aspirins and call in the morning.”  To his siblings, he was always a ready listener, problem solver and he could bring a smile to our faces in any situation.

He was preceded in death by his father, Bryan; mother, Marianne and his brother, Donnie. He is survived by his sisters, Mary Beth Garson of Bosler, WY and Sherry Lee Norwood of San Clemente, CA; brothers, John Mills, Knoxville, TN and Mark Mills, Longmont, CO.  He was the uncle to 2 nieces, 6 nephews, 5 great nephews and 3 great nieces.

The family asks that contributions in memory of Scott be made to any of the following organizations, of which he was a member: Ducks Unlimited; the Rocky Mountain Elk Foundation; and the Trout Unlimited Organization.

An honorary military service will be held on February, 26 at noon in the chapel of the Oregon Trail Cemetary.

To order memorial trees or send flowers to the family in memory of Scott Mills, please visit our flower store.