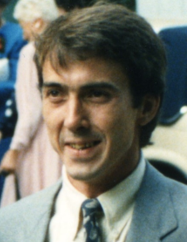 Thomas Aldrich, 64, died peacefully on March 23, 2021 in Wyoming Medical Center, Casper, Wyoming after a long battle with heart disease.  Tom was born on July 22, 1956 to Mary and Jack Aldrich in Deerfield, Massachusetts.  He grew up in Holbrook and then later in Holliston, Massachusetts from the first grade onward.  Tom graduated from Holliston High School in 1974 and attended the University of Massachusetts, Amherst. He held several jobs in the following years until he and his brother, John, founded Aldrich Stone in Norwood, Massachusetts.  The incorporation and expansion of Aldrich Stone became Tom’s proudest achievement.

Tom had a fiery passion for the outdoors, a passion he shared with his lifelong friend Richard Smith. He had a deep respect for all living things, insisting that even “ants are people too.” Tom was a consummate salesman and he often used that talent to appeal to people’s better nature. Tom demonstrated an innate intelligence, wisdom, and a deep abiding faith in those fortunate enough to call him a brother and a friend. Tom never quite mastered the art of telling jokes, but he was always to the first to laugh at other people’s jokes, no matter how lame. It was this ability to make people feel good about themselves and to uplift them with a rare sincerity and openness of heart that was his most endearing trait.

Tom loved every outdoor sport, from ice hockey, baseball, football and swimming as a youngster to golf, boating and fishing as he got older.  Tom was an awesome cribbage player as well.  Though he loved any contest, he believed that a good game was not one where someone wins, it's where nobody thinks they've lost.

Tom is survived by his brother, Peter of Casper, Wyoming; his sister, Anne Aldrich and sister-in-law Kim Whitehurst of Ellsworth, Maine; his sister, Jean Quinn of York Beach, Maine; his brother, John and sister-in-law Margaret of Holliston, Massachusetts; his brother, Rob and sister-in-law Lisa Palmer of Arlington, Virginia; his brother, Ed of Cheverly, Maryland; his sister, Mary Aldrich of Fort Collins, Colorado; and seven nieces and nephews.  At Tom’s request there will not be a public memorial service.  A celebration of his life will be held at a later date. Gifts in Tom’s memory may be mailed to Medical Care Development, 11 Parkwood Dr., Augusta, ME 04330; these funds will be sent to a local non-governmental organization in Mozambique, “Association for Community Development”; this NGO has child survival programs as well as youth outreach programs. Tom visited Mozambique and later supported youth sport programs in Maputo.

To order memorial trees or send flowers to the family in memory of Thomas Aldrich, please visit our flower store.