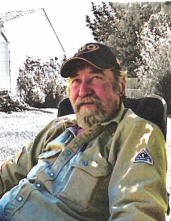 Thomas "Tom" Ryerson, prepared to meet his Lord, passed away in Casper, Wyoming on September 12, 2020. Tom was born August 1, 1949 in Aberdeen, South Dakota to Gilbert and Ruth Ryerson. Tom served in the United States Army primarily stationed in Germany. Tom then worked in the oil field for 40 years. Tom accepted Christ in 1976 and was baptized in the Niobrara River in Gordon, Nebraska. Tom and his family moved to Casper in 1989.

Tom was proceeded in death by his father, Gilbert Ryerson and mother, Ruth Ryerson as well as his sister, Cathy Virgo.

In keeping with Tom's wishes, a small private ceremony will be held at a later time.

To order memorial trees or send flowers to the family in memory of Thomas Ryerson, please visit our flower store.