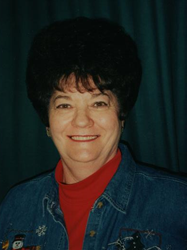 Verna Lee (Boyd) Valentine, 82, of Casper, Wyoming, passed away on Aug 24, 2021 of natural causes.  Verna was born in Indian Grave Gap, Virginia to Venia and Curtis Boyd on May 18, 1939.  She graduated from Garden High School in Grundy, Virginia, in 1957, and moved to Arlington, Virginia, where she met and later married Dale Valentine in 1958.  They eventually relocated to the family ranch in Glenrock, Wyoming in 1968, where they raised three children.

She was an accomplished businesswoman and a primary partner in the management of Valentine Construction for 23 years and later in her career with Casper businesses serving the local oil and gas industry.  Verna was an avid reader especially of local history, loved attending live theater, going to the movies with friends, and, of course, her Denver Broncos, however her greatest joy was spending time with her children and grandsons.

She is preceded in death by her parents, her sister and brother-in-law Lois and Leo Weber, and two infant sons.

In lieu of flowers, her family asks you to consider a donation to Meals on Wheels Foundation of Natrona County, Central Wyoming Rescue Mission or to a similar charity of your choosing.

To order memorial trees or send flowers to the family in memory of Verna Valentine, please visit our flower store.