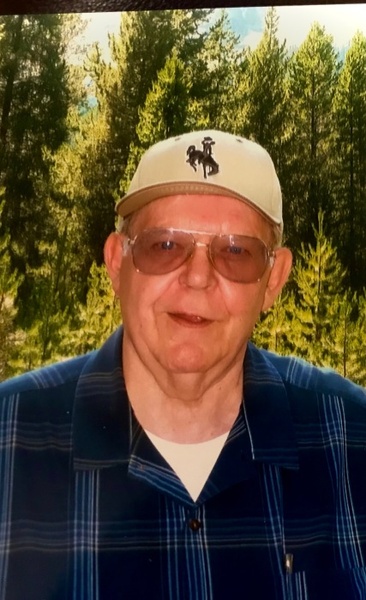 Chuck was welcomed into this world on Dec. 30, 1932 by his parents Erick William and Alma (Telander) Erickson and his adoring older sisters Arlene Julia and Lillian Marie.  Chuck was anxious to tell any listener that he won first place in “The Most Beautiful Baby” contest when he was a toddler.  He had a Norman Rockwell life as a boy fishing, playing ball, catching frogs, riding his bike and returning home when the street lights came on.  As youngsters the girls once tied their “precious brother” to a tree and attempted to burn him at the stake, and we know they wrote “Charles is a sap” on their checkerboard that we still use today.

After graduating from NCHS Chuck enlisted in the US Army and served in Japan during the Korean conflict.   Upon his return he worked in retail, eventually owning his own store, “Woods for Men” in downtown Casper. Needless to say, he was a sharp dresser.

Uncle Chuck was adored by nine nieces and nephews and their children.  He was a gracious and tolerant host to this often loud group.  All remember being hoisted up onto Chuck’s shoulder for a high view of the world, his fondness of sweets and fried chicken, and his refusal to give up the remote ever!  He loved going to Marie’s place in Jackson Hole for family time with the Mitchlers.  He was a lifelong friend and caregiver to his widower father Erick.  Chuck always enjoyed a party but he was most proud of his sobriety for over 40 years.

Chuck was the penultimate sports fan and ardent supporter of the Wyoming Cowboys.  No matter the weather, every home weekend he would be in his “great seat” cheering them on.  When he could no longer drive to Laramie he had to settle for televised games but he would still call every play. He was a longtime season ticket holder and member of the Cowboy Joe Club. We all remember his vanity plate “WYO 1”.

There will be a memorial service for Charles at the Oregon Trail Veterans Cemetery Chapel in Evansville at 2:00 p.m. on Monday Dec. 07, 2020.  The family requests that in lieu of flowers, donations be made in Chuck’s name to the Cowboy Joe Club, 1000 East University Ave. Dept. 3414, Laramie, WY 82070.

To order memorial trees or send flowers to the family in memory of William Charles Erickson, please visit our flower store.